The Abortion Supervisory Committee’s annual report has been released. The report includes the abortion stats previously released by Stats New Zealand  in June (though the media never really gets this) as well as some additional statistical info, like ethnicity ratios and timeliness of abortion by DHB, plus the ASC’s commentary. You can download a pdf of the report over at our Web site, (look under “The Latest” column). It’s well worth a read. 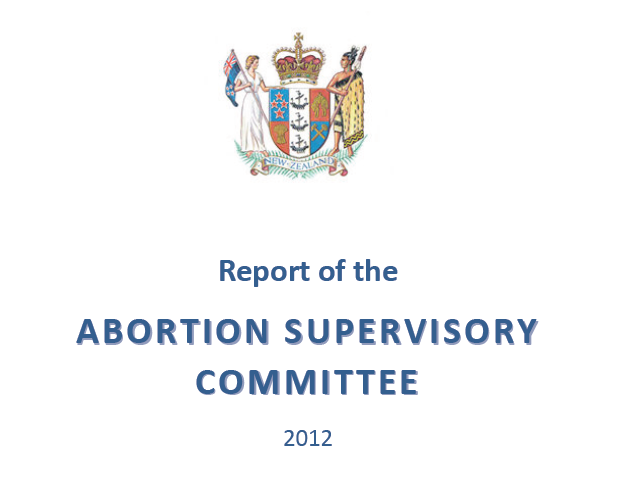 The overall impression is of a system that is increasingly unworkable, with fewer certifying consultants who, the ASC reports, are facing distressing amounts of harassment (as are patients and others associated with abortion care), and all this as timeliness of abortion care and uptake of early medical abortion are barely budging. No matter what the situation on the ground is for providers and women, though, you can be sure that Parliament will do nothing to fix any of it.

Our August Newsletter, also available to download over at our Web site, reported on the annual stats, which were released on 19 June.  Here’s our summary of those, which this new report also includes, although the ASC renders most of the stats in easy-to-read graphic form.

• A continued decrease in overall numbers, down 767 on the previous year to 15,863.
• A drop in the number of abortions among 11-14 year olds, down to 68 in 2011 from 84 in 2010
• Disappointingly little progress in ensuring a higher percentage of abortions are performed earlier in pregnancy. Only 34 percent were performed at 8 weeks or less, down from 36 percent in 2010. For pregnancies under 10 weeks, the figure was 55 percent in 2011, down from 56 percent in 2010. (This reflects New Zealand’s poor uptake of early medication abortion – only 6.8 percent of all abortions are medical, as opposed to more than 40 percent in the UK and 72.5 percent in Scotland.)
• Most abortions were the woman’s first, at 62 percent.
• The age group among which the highest percentage of abortions took place was among 20-24 year olds (32.5 percent of all abortions) followed by 25-29 year olds (21.1 percent).
• 45 percent of women who had abortions in 2011 had no children; 21 percent had one previous child and 33.8 percent had two or more children. That means 55 percent of those having abortions already had one or more children.

ALRANZ issued a media release at the time welcoming the lower figures with president Dr. Morgan Healey noting that ALRANZ hoped the drop was “reflective of the ability of women in New Zealand to have autonomy over their bodies and reproductive decisions.”

The ASC report addresses the harassment of certifying consultants and patients in general, and of Invercargill staff in particular. Here’s what the report says:

We are … concerned about the impact of being known as a certifying consultant in some locations.  During the last year the Committee has heard distressing reports from certifying consultants where they, their families, patients and wider public have been the subject of harassment. Particularly distressing are reports of women seeking fertility assistance who have been harassed when they were mistakenly thought to be seeking pregnancy termination.

It’s important that the ASC is talking about this, though it’s pretty hard not to draw the conclusion from that last sentence that it’s of less concern to the committee if women seeking abortions are harassed than, say, women mistaken for those seeking abortion. If you’re having an abortion, apparently you somehow deserve to be harassed. Way to go to reinforce abortion stigma ASC!

And here’s what the ASC had to say about Invercargill: (For the latest on what’s going on in Southland, see this post.)

It has also come to our attention that harassment of medical staff is taking place in Invercargill resulting from services now being offered at Southland Hospital. We are disappointed that this is occurring.

“Disappointed”! Strong words, not. No mention of what the ASC intends to do about this. And, of course, we can expect no support from our elected leadership, which means it’s up to us to keep pushing, and to do the best we can to support the staff and patients. No one, not the Ministry of Women’s Affairs, not the ASC, not politicians, not moderate religious leaders, not community leaders, seem willing to speak out for the rights of people associated with legally providing and receiving abortion care in Aotearoa/New Zealand to be able to do so without harassment.

Readers will recall that the 7-year-long Right to Life v ASC case finally ended on 9 August 2012 when the Supreme Court dismissed RTL’s appeal. In its decision, the Court ruled that the ASC did not have the power to scrutinize individual doctors’ decisions regarding approval of abortion but that the ASC could ask consultants how they were approaching their decision-making in general.

This report is the first comment we’ve had from the ASC on that case, and it writes:

The Committee notes it already makes regular enquiries of all certifying consultants. At the time of annual reapplication consultants report on qualifications, continuing professional education, peer support, intended years of service and the nature of the practitioners practice. Other enquiries will continue to be made as issues arise.

Indeed, the ASC is not saying much here, but this seems to suggest that the ASC thinks it’s already doing what the court said it should do.

The ASC notes the continued downward trend in abortion numbers overall, and points particularly to the sharpest decline being in child to teenage groups. It expresses concern that there is no decline in abortions sought by women who have had two or more previous terminations:

Cue the media focus: Apparently reality shows are helping push a decline in teen pregnancy.  According to the ASC, this is because “extensive reality television programming depicts the struggle most young people have in attempting to raise a child of their own…” It goes on to say, doh!, that “the decline is also likely a result of younger New Zealanders practicing safer sex and having less sex overall”. Would love to know where this reality show theory is coming from. The relevant paragraph in the report begins with a “It has been suggested to the Committee….” Um, by whom? Does anyone out there know of any solid research on this reality TV phenom? We’d love to know. It’s all a bit weird.

The DomPost story did say this: “Several studies, including a 2010 research paper on cosmetic surgery shows, out of Rutgers University in New Jersey, have shown reality television viewing could significantly influence people’s attitudes and decisions”, but that’s not wildly convincing. We also note that Family Planning’s Dr. Christine Roke is quoted as saying Reality TV is a good form of education. (That depends!) Still, would like some relevant reality-based research on this one.

Apparently not watching so much reality TV are the 20-24 year olds. There’s a new graph this year on “no contraception by age group.” In other words, what were the ages of the 52% of women who had abortions and said they’d been using no contraception? According to the report, the biggest group, at 32%, were 20 to 24 year olds; the next biggest, at 20% each were under-20s and 25-29 year olds.

Timeliness, or Lack of It

When it comes to timeliness, Northland and Southland are still coming in last, meaning women in those districts are accessing abortion care much later than those in other districts. (The median gestation in those districts for first trimester abortion is nearly 10 weeks! That is not a good stat, and that’s the median, meaning access is much later for some women.) Here’s hoping the Invercargill service will help improve that stat for Southland. But what is going on in Northland?

We’d welcome other analysis/interpretation of the report from anyone out there in pro-choice land. You can post a comment, or email us at alranzbloggmail.com