From Our Files: Enter WONAAC

Background: The two main pro-choice groups active in the 1970s were ALRANZ and WONAAC, the Women’s National Abortion Action Campaign. ALRANZ was formed in 1971 and WONAAC in 1973, coming out of an abortion action conference held 14-15 July 1973 in Wellington. Both groups still exist, though ALRANZ is the most active. The following is an excerpt from WONAAC’s first Newsletter, dated August 1973. Ahh, the optimism…nearly 40 years, and still waiting…

National Women’s Abortion Action Conference
There is good reason to believe that New Zealand women will be running a close race with their overseas sisters in winning the right to abortion. The National Women’s Abortion Action Conference held July 14-15 was an encouraging indication of the potential there is to build the kind of campaign that can win repeal of abortion laws. 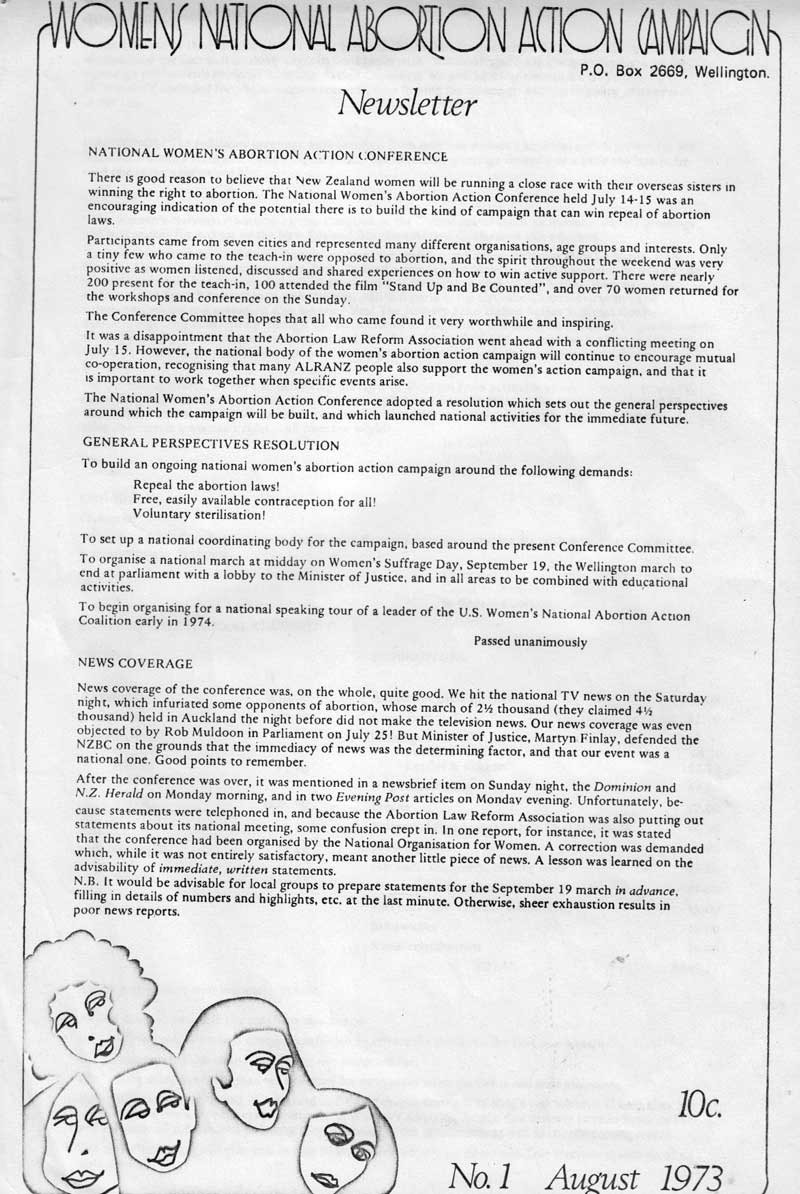 Participants came from seven cities and represented many different organisations, age groups and interests. Only a tiny few who came to the teach-in were opposed to abortion, and the spirit throughout the weekend was very positive as women listened, discussed and shared experiences on how to win active support. There were nearly 200 present for the teach-in, 100 attended the film ‘Stand Up and Be Counted’, and over 70 women returned for the workshops and conference on Sunday.

…
General Perspectives Resolution
To build an ongoing national women’s abortion action campaign around the following demands:
Repeal the abortion laws!
Free, easily available contraception for all!
Voluntary sterilization!
…
Our Name
Partly because of the confusion which arose between the conference name and the National Organisation for Women, and the fact that so many organisations begin with ‘National’, we have changed the name of the campaign to Women’s National Abortion Action Campaign. We will be using the initials WONAAC … thus linking the campaign with its inspiring counterpart in the U.S.
*****
This entry is part of an occasional “From Our Files” series in which we dig through ALRANZ newsletters and related files to give readers a bit of insight into the recent history (usually post-1960s) of the struggle for reproductive rights in New Zealand. All the entries are listed here.