A community meeting in Thames on anti-abortion harassment was followed on Friday morning by a peaceful demonstration in support of Thames hospital abortion patients.

More than 40 people attended the Thursday night meeting to discuss the on-going harassment of abortion patients  in Thames, and resolved to take action to counter the anti-choice protests.

Speakers included Jan Logie, Green MP, who told the meeting of the need to decriminalise abortion, which is still regulated as a crime. Ms. Logie said the criminalised law reinforced abortion stigma, which anti-choice protesters appeal to with their actions.

“Both the current law and the anti-abortion protests are based on a lack of trust for women,” Ms. Logie said.

ALRANZ President, Terry Bellamak, also spoke at the meeting, saying “women experience harassment as intrusive and intimidating, even if protesters are silent.”  She said that anti-abortion harassment is another form of the street harassment all women experience.

Rachel Harrison a longtime sexual violence prevention worker in Thames made links between the abuse and control of women at the hands of violent partners and what women feel when they pass anti-abortion protests. “Both are about trying to control women,” she said. 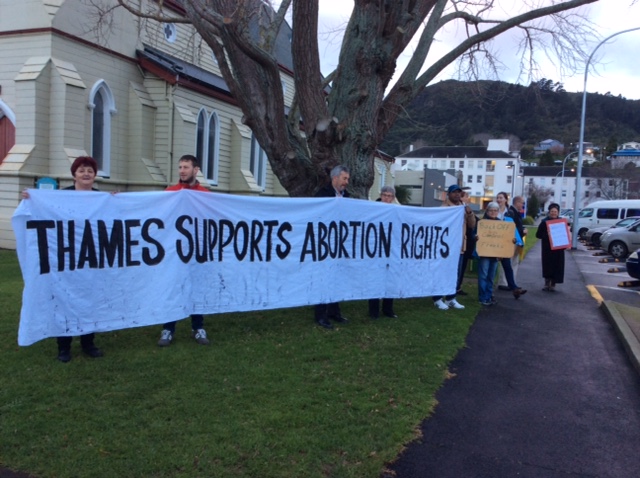 Scott Summerfield, an ALRANZ member and local organiser, said it was really positive that the Thames community, which has looked at the harassment and intimidation for so many years, has decided to take action towards supporting women in Thames and informing the community about the challenges facing women seeking abortion services in New Zealand.

Anti-abortion protesters gather outside Thames Hospital every Friday when abortion services take place. Because the Bay of Plenty District Health Board does not provide a surgical abortion service, many Bay of Plenty women must travel to Thames for care, along with women from Waikato DHB.

Last year, 180 abortions were performed in Thames out of a national total of 13,155. Waikato District Health Board says it has received complaints that the protests are distressing to patients and their families, but pro-choice advocates say little action has been taken and the protests continue.

The meeting resolved to continue with on-going action to ensure Thames is a safe place for women needing abortion care.

This links to a flier for the event, with some Facts and Figures about abortion in Aotearoa and the Thames service.

And here’s some media coverage by Stuff and NewsHub.