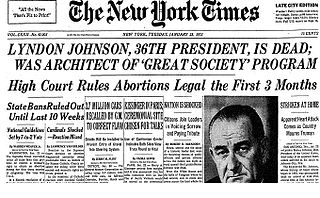 On the 39th anniversary of Roe v Wade, the seminal US Supreme Court decision that made abortion legal up until the point of ‘viability’, I want to take a moment to think how New Zealanders can play a role in ensuring abortion rights are protected in the 21st century. Remember Roe v Wade is not simply a celebration (or a call to arms) for American pro-choicers, but should be extended beyond the national context of America and considered within a wider campaign for reproductive health and rights. To this end, I want those of us here in New Zealand to consider what will it take for us to reform our own abortion laws?

From my own perspective, cultural and social discourses are key drivers in reproductive rights and abortion. While different in each socio-political location, it is important to understand how abortion is constituted by these discourses and how that impacts on the strategies for change. To this end, I want to use the differences in North American abortion politics to promote reflections on the ways in which abortion is constituted in a New Zealand context and the barriers or enablers this creates for change. Importantly, I am not here to posit the answers to these questions, but want to use this as a means of engaging in a dialogue with the reader on how you understand abortion in a New Zealand context and how this can or should be used to affect change.

The pro-choice movement in the US has never really had a chance to be complacent about the right afforded to women in Roe v Wade. From the outset, campaigners have struggled to maintain the right to abortion against myriad and powerful forces that would relish the enforcement of all pregnancies. Examples include both the Helms and Hyde Amendments of the 1980s, which limited the use of federal funding for abortion both national and international. This combined with the recent onslaught of legislation at both the federal and state level to make abortion inaccessible and onerous have forced much of the pro-choice movement onto the defensive yet again. These calculated attacks on choice have largely come from arch conservative religious groups which seem hell-bent on constituting womanhood as motherhood and controlling women’s sexuality through these discriminatory and sexist discourses. I believe the success of this minority in the last year stems largely from the fear and instability of the US economy at the moment. The yearning to control something is being waged over women’s bodies, while taking the attention away from the issue people are most concerned about – jobs.

These most recent battles are reminiscent of the nascent state of the United States, where nation builders worried that the growing divide between federalist and anti-federalists, those who believed in the necessity of a strong central government and those who advocated for the primacy of state rights, would destabilize a growing nation This tension has come to define the socio-political landscape of the US, with swings in various directions depending on the political atmosphere of the day. This has proven important with regard to abortion and reproductive rights because the goal posts continually shift between federal and state levels, stretching pro-choicers across these various fields. It is has also resulted in another important Supreme Court ruling on abortion, Planned Parenthood v Casey, which allowed for states to work away at the margins of access for women. It is the historical contestation between notions of state and federal rights and the resurgence of these arguments as a result of the Great Recession that perhaps has had the greatest impact on abortion rights in the US in the last two years.

Juxtaposing the American situation with its northern neighbor, Canada, there is a stark contrast between how the issue of abortion has been constituted and the legal context for the right to an abortion. While the Harper government has in recent years attempted to limit aid to international organisations which provide abortion services in developing regions, there has never been the vociferous and dangerous anti-choice movement that plagues the US (or perhaps more accurately, nothing to the same extent, with clinics being burned and abortion doctors being assassinated).

I think this largely stems for the diverse histories that separate the US from Canada and the socio-political discourses that have helped to construct notions of nationhood and patriotism. I base this not on any in-depth knowledge or research on Canada or Canadian history, but on my own experiences as an American in discussion with Canadian friends (and to some extent the recent activities of the American state governments to restrict abortion access which has to date not been mirrored in provincial governments in Canada).  What I mean to say is that the political atmosphere and cultural signifiers associated with each country have developed alongside one another but not in a similar or convergent manner. This to my knowledge has had an impact on how abortion has been constituted, legitimized and legalized in the two countries. I can remember a Canadian friend describing how abortion is considered a right under their legal framework and that very few Canadians question the veracity of such a claim. This is not to deny that access and availability of abortion services is variable in such an expansive nation, but that on a national and national psyche level, the social mores associated with abortion allow for no set restrictions.

On the 39th anniversary, it is important to remember not only to celebrate, but also to contemplate our own situation here in New Zealand. American pro-choicers have not had the opportunity for complacency.  What this leaves me thinking about is how is abortion constructed in different historical locations and what impact do these social discourses have on the legal framework and ideas regarding abortion as a right? I ask you to think about the following questions:

What do we, here in New Zealand, risk in not vocalizing our disgust or anger over women’s continued criminal state?

Do we need to have our access or availability threatened in some way for action?? What do the ideal reproductive services look like to you and how can New Zealanders go about ensuring that the needs of women to necessary medical services like abortion are being met?