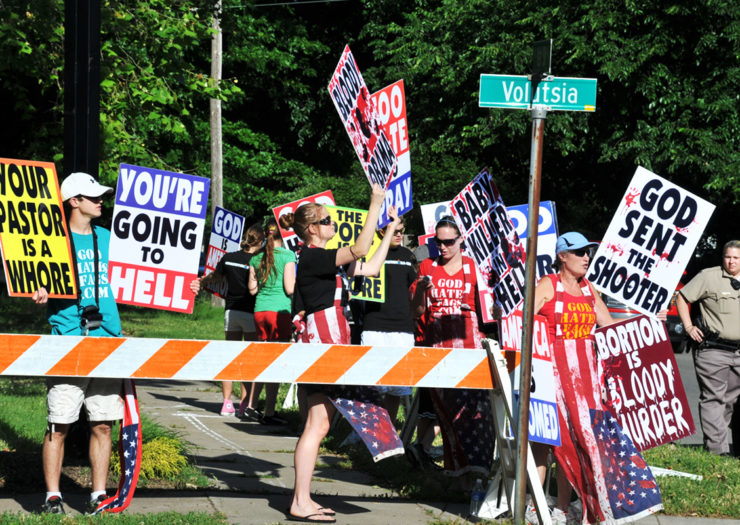 No one’s exercise of free speech should make another feel less free.

One aspect of the Abortion Legislation Bill that got a lot of airtime at the select committee, but not so much in media commentary, is safe areas.

Safe areas are zones where people going to a medical centre for abortion care (or any other kind of care, for that matter), and people going to work to provide that care, can be free from targeted harassment by anti-abortion extremists.

What kind of behaviour are we talking about?

Most of us have seen what I mean: people with bloody pictures on signs getting up in people’s faces with pamphlets or offers of “counselling,” ostentatiously declaring they will pray for you, loudly exhorting people to not receive the health care they came for, calling them murderers or sluts or sinners.

This is not protest – it is harassment. These extremists are not addressing Parliament, or the DHB, or all the world with principled statements about what they believe. They are targeting specific people, not politicians or public figures, who are just trying to go about their day. Their message is not political; it is not about their opinion of abortions or the current state of the law – it is their judgment of a specific person’s decision to get health care. They are not expressing their opinion; they are trying to bend a stranger to their will.

Basically, they are sticking their noses into other people’s business.

You might ask, why don’t people just ignore it? Why not just walk on by?

For one thing, it’s unfair to put the onus on the people being harassed to just avoid it, instead of addressing the behaviour of those doing the harassment.

If you’ve been bullied or harassed you already know how difficult and ineffective it is just to pretend it is not happening. The majority of people seeking abortion care are women, who are likely all too aware of the heart-pounding terror of having a man scream at you on the street. Trans and nonbinary people often face even more harassment in their daily life, and research clearly demonstrates that abuse like that has very real negative impacts on mental and physical health.

The fact that harassment is common doesn’t mean that we should accept it as an inevitable opportunity cost of existing with a uterus in our society.

“But what about freedom of speech?” you might ask.

The conflation of harassing people with freedom of expression is a study in misogyny.

It is an example of terrible behaviour that women are just expected to put up with, because the powers that regulate public behaviour, like the law or the police or Parliament, don’t consider the dangers, indignities, and microagressions women and gender minorities endure on a daily basis to be as important as traditionalists’ right to inflict them.

We need safe areas to ensure that people can go to their doctor’s appointments without being harassed. If someone wants to engage with anti-abortion activists, they can go talk to them – they would only be 150 meters away. But those who don’t wish to engage deserve to be left in peace.

Many people do not realise how daunting harassment can be. People who speak to me about their abortions almost always remember their fear of being harassed. It looms large in the imagination because of the stigma that still surrounds abortions. We as a society perpetuate that stigma when we decide that the right of people to express their views via harassment is more important than someone else’s right to seek medical care safely.

One problem with the bill is the high bar for establishing a safe area. It requires an Order in Council on the recommendation of the Ministers of Health and Justice. To create just one safe area around one facility.

These ministers are already extremely busy. Let’s be honest – how are they going to be able to consider requests of this nature from all the clinics and surgeries likely to be affected? Not to mention the doctors, nurses, and other staff of clinics and surgeries who will have to spend time advocating for their right to go to work without being harassed, instead of providing medical care.

To improve access to currently underserved areas, the Ministry of Health will likely try to persuade trained GPs and nurse practitioners in local surgery settings to provide early medical abortion care. But how many local surgeries will sign on to that if they cannot be protected from harassment unless they manage to get their very own Order in Council?

How will applicants for safe areas be required to demonstrate they satisfy the criteria? Will they be able to apply pre-emptively, so that they can be protected as soon as they start offering some form of abortion care? Or will they, and their patients, have to suffer actual pain, humiliation, and abuse for the minister to be able to consider their application? Has the government given up on preventing harm?

It is not acceptable to treat patients and providers as collateral damage on the path to establishing a safe area.

Another problem crops up when trying to hold someone accountable for violating a safe area. People engaging in intimidating behaviour can only be held accountable if both limbs of the statutory test are satisfied: 1) the suspect intended to cause emotional distress; and, 2) a reasonable person would find their behaviour emotionally distressing.

How do you prove a person intended to cause emotional distress? Ask any old geezer yelling “keep your legs closed” outside an abortion service what his intent was, and he will tell you all about “sidewalk counselling” and “loving them both.”

Since no anti-abortion protester is likely to admit they intend their actions to cause distress, the first limb of the test will never be satisfied. Unless that “and” becomes an “or” you might as well delete the whole subsection.

The government is on the right track with making safe areas possible. But they need to be much more realistic about implementing them. It’s unjust to expect people to suffer pain, humiliation, and harassment while they wait for the government to decide their rights are worth protecting too.