Book Review: How to Be a Woman 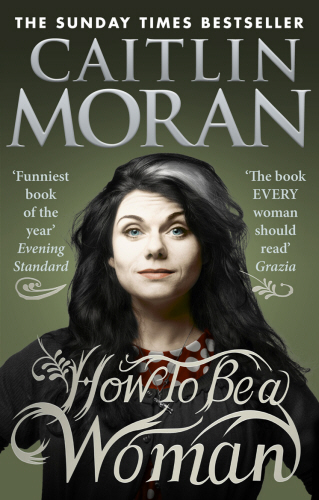 How to Be a Woman, by Caitlin Moran

FIRST OF ALL, Caitlin Moran clearly has a superior first name, which bodes well. How To Be A Woman, described on the back cover as “part memoir, part rant” begins, as many memoirs seem to, with our protagonist being chased through a park on her 13th birthday by a bunch of boys with rocks. Moran recalls her first teenaged experiences with equal parts humour and chagrin, managing to transmit her awkwardness to the reader without being too cringey. A warning to all potential readers: if you feel uncomfortable at the thought of long descriptions of pubescent adventures in masturbation, musings on vaginas and their furnishings and a rather harrowing description of childbirth, this book may not be for you.

Moran’s memoir is a sort of journey through feminism, as she has lived it. Though she discusses her admiration of academic feminists like Germaine Greer, she points out several issues with mainstream academic (Western) feminism, such as Greer’s incredible, unforgiveable transmisogyny, and the Dworkin-esque stance towards pornography which has been the subject of many a debate for a couple of decades. How To Be A Woman describes the many instances in Moran’s life when she felt legitimately confused and unsure of exactly how she was supposed to do things, ranging from a hilarious chapter on what exactly to call her genitalia (some great suggestions being ‘ducky,’ ‘cupcake,’ ‘pasta shell,’ ‘Yorkshire pudding’ and my personal favourite: ‘Birmingham City Centre’) to a rant about the absurd amount of time women are expected to spend ridding themselves of body hair.

The book is extremely well written and funny, with some unexpectedly hilarious sections, which can be dangerous to read while around other people (I had to absent myself briefly from my workplace because of Moran’s suggestion that Margaret Thatcher’s pubic hair may have been styled exactly as it was on her head). While I very much enjoyed it, at times I was made a little uncomfortable by the suggestion (never overtly made) that there is only one way to be a woman and that all women have similar problems to Moran (such as having to wear ugly underpants or turning into a bridezilla). The section which made me most uncomfortable was her discussion of strip clubs and a distinction made between strip-clubs and burlesque, which seems to be based on nothing more than the fact that burlesque costs more, the costumes are better and middle-class women often enjoy watching it. Her assumption that all strippers (or sex-workers presumably) are stripping solely because they have to financially is also something that bothered me. Despite these small niggles, however, most of my time spent reading this book was divided between laughing so hard that mochaccino came out of my nose and thinking to myself ‘so it ISN’T just me that happens to!’

I became very worried by the chapter called “Why You Should Have Children” (which, by the way, may have put me off the idea of having children entirely) but was immediately placated by the following chapter called “Why You Shouldn’t Have Children.” In the latter section, the author recalls a discussion she had with an editor of hers about why she hadn’t asked Kylie Minogue when she was going to reproduce, eliciting a stunned sort of ‘who cares?’ response from Moran along with the killer line: “You never get asked to ask Marilyn Manson if he’s been hanging around in JoJo Maman Bébé, touching tiny booties and crying.”

In her chapter on fashion, Moran makes a statement which surprisingly (or not, perhaps, in this Sex-And-The-City-fueled, How-to-look-like-Trinny-and-Susannah’s-Next-Top-Model infused world we live in) I have never actually read in a published piece of writing: for most women, high-heels are devilishly uncomfortable and never look as good as we are led to believe they will. To me, her chapter on abortion is a thing of beauty, which makes me want to cry tears of joy while simultaneously punching the air, à la Judd Nelson at the end of The Breakfast Club. It is the most honest piece of writing I have ever come across on the subject and while it could not be described as the most cheerful part of the book, it deals eloquently and seriously with some of the issues surrounding abortion, including a stark, unromantic description of her own experience, and the particularly good point that women making this one decision are subjected to “more pressure about preserving life than, say, Vladimir Putin, the World Bank, or the Catholic Church.”

How To Be A Woman is by no means a replacement for a serious discussion of feminism, or for a more scholarly feminism-101-type text, but it is a wonderful example of how feminism applies to real life in the most ordinary ways. For me, this book wasn’t just the source of many laughs, but of a sense of safety, that I could read and enjoy Moran’s writing without the fear that at any second a bout of misogyny was going to burst through the pages and hit me about the head with a pair of Skechers:

Shape-Ups. I am confident that I will thoroughly recommend it to everyone I know, including you (and your mum).

This review appears in our November-December Newsletter, which  has been sent to members. The Newsletter will be posted on our Web site at www.alranz.orgin the coming weeks.