Some Choice Activism in Invercargill 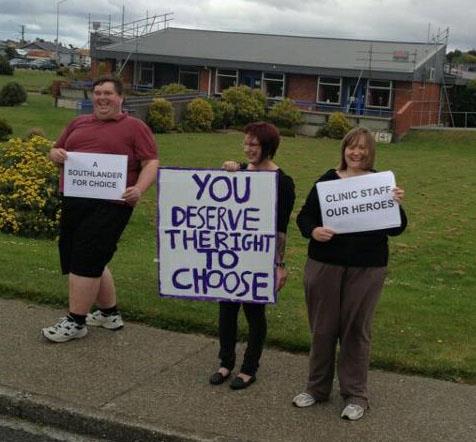 Approximately 20 pro lifers turned up and set up camp on the grass at the corner of the road turning into the hospital – on DHB property. We made sure to stand legally on the pavement, around 80m away at the hospital entrance, where we could be seen by traffic in all directions.

It was fantastic to see the Southland public so sympathetic to our cause. We got approximately 30 toots from cars, to their 5, and a friendly supportive wave from almost everyone entering and exiting the hospital. One even stopped to take a picture of us and sent it through to show their support. Unfortunately no media attended this week, a shame as they would have seen both sides of the Southland debate, instead of limiting themselves to coverage of the pro-life view.

It was interesting to see most of our toots and waves were from elderly women, no doubt angry we’re still fighting what they fought for 40 years ago. Southland is a province like any other with a variety of views, not the deeply Christian conservative enclave suggested by Southlanders for Life.

The communication between the two groups was respectful. Southlanders for Life did as promised sit there quietly in peaceful protest, as they have the right to do, however it was fantastic to have both sides represented this time around.

It was also fantastic to have the opportunity to give women and staff a friendly wave and support after they had braved the pro-life contingent on the corner. We will be back next week – if you’d like to join us, please contact us via the blog or Rachael Goldsmith directly at greykittiewhanau@yahoo.co.nz.