Dispatches from the US: The US has a problem with abortion terrorism

This is the second in the blog series by Morgan Healey, immediate past President of ALRANZ, who has recently returned to the US. It aims to bring to life the uniquely absurd state of reproductive rights and justice in the US.

The US witnessed yet another attack on a Planned Parenthood clinic in Colorado Springs, which the newspapers have described as a siege. On Friday, 27 November, a man entered the Colorado clinic and for five hours exchanged gunfire with police. Three people were killed and nine wounded. At the moment not much is known. The man taken into custody alive has been named as Robert Lewis Dear, 59 (a good point has been made that if the suspect had not been white, odds are that he would have been shot dead at the scene). It will take time to piece together a narrative of what occurred yesterday – who Robert Dear is, where he got his high power assault rifle, and what his motive was. 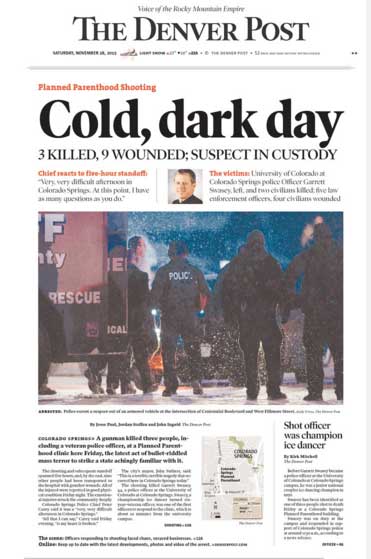 What is known is that this community will take time to heal from this event. I cannot begin to imagine the intense anguish and fear the victims, their families, the staff that work at the clinic and their patients must be feeling. My heartfelt condolences go out to all those involved. They deserve our compassion and sympathy but also our anger. Anger that such acts of aggression could occur inside a medical clinic. It seems unlikely given the vituperous battle against Planned Parenthood by the Center for Medical Progress (CMP), which released a series of surreptitious, heavily-edited videos this summer (see RH Reality Check for more information), and subsequent moves by Republicans to defund the organization, that this was anything but a targeted attack aimed at terrorizing Planned Parenthood. In some ways Dear’s motives are irrelevant. Yesterday’s tragedy highlights a growing intensity of terrorizing acts aimed at reproductive health clinics, and the fact that hateful speech can flame these acts of violence.

In Ilyse Hogue’s statement, President of NARAL Pro-Choice America, she described yesterday’s horrible event as an act of domestic terrorism (see Dahlia Lithwick’s October 2015 piece for the link between the burning of black churches, abortion clinic attacks, domestic terrorism and why we should be horrified). Violence against abortion clinics has been a common occurrence since Roe v Wade (Vox has a good graphic of the types of violence here). Clinic and staff members have been subject to daily threats against their lives – death and bomb threats – harassment, including their family members, and arson and bombing attacks. Before yesterday, eight people had been murdered by anti-choice terrorists. Patients coming to reproductive health clinics, regardless of the care they are seeking, face protestors, harassment and intimidation.

This was also not the first attack against Planned Parenthood in the wake of CMP’s videos. In the last several months, Planned Parenthood clinics have been vandalized or subject to arson attacks across the country – New Hampshire, Missouri, Washington, California. And while by all accounts local law enforcement have responded to these events with due concern, there has been no calling for a Congressional hearing to investigate the threat of domestic terrorism on abortion providers. (NARAL does have a petition calling on the Department of Justice to investigate these attacks.) Instead, the exact opposite has occurred, Congress continues to waste time and money harassing Planned Parenthood and threatening to defund it.

And before the media begins to describe Robert Dear as some lone wolf, mentally ill, white man with access to a gun and a dislike of abortion/Planned Parenthood, we as a country need to stop and examine the pattern of violence against abortion providers. This is not the act of one man, but a systematic expression of hatred fostered by fanatical conservatives. By disavowing the reality of these acts in order to assuage our own fears and deny our culpability in perpetuating this violence, we embolden those to continue their crusade against clinic providers and the people who need care. To counter these violent fanatics we need to call a spade a spade and start talking honestly about domestic terrorism, making links between the battle being waged against abortion/reproductive health clinics, racist violence against people of color, and xenophobic, anti-refugee discourses aimed at Iraqi and Syrian Muslims. These are all part of the same disciplinary regime aimed at maintaining hegemonic, white, male, Christian power structures.

Despite all that has happened, Planned Parenthood staff refuse to be intimidated. The doors to 28 other Rocky Mountain clinic remain open, just one day after this terrifying event, and Planned Parenthood intend to rebuild the Colorado Springs site. This is more than an act of heroics, but an incredible sense of dedication and service to the community and the patients they serve. I am grateful to all at Planned Parenthood for what they do and their bravery in the face of daily adversity. The world needs more people like them. Thank you Planned Parenthood for all you do. #StandwithPP

And for the rest of us in the US, it is time to look inward and acknowledge that the fear and intimidation against abortion providers is not a new experience. It is based in a long tradition of widespread, national domestic terrorist acts. Until we face that reality and act to curb this violence, people seeking basic reproductive care and those who provide a necessary service will fear for their safety. Is that really the world we want to live in?