Could this happen here? The unnecessary death of Savita

The unnecessary death of Savita: Why safe and legal access to abortion must be an essential part of all reproductive health services

In Ireland (and around the world) this past weekend tens of thousands of people marched in memory of a young woman, whose life ended in horrific manner because of an outdated and harmful law. Savita Halappanavar was the victim of Ireland’s archaic abortion laws, which equates the right to life of the mother to that of the ‘unborn’. She was left in excruciating pain for days until she finally succumbed to septicemia, all because of medical uncertainty around the current law. 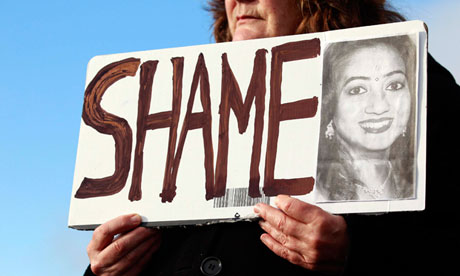 However, Savita’s death, premised in the 8th Amendment, was essential the result of political abrogation. Since the X case in 1992, the Supreme Court, in it’s ruling, placed the onus on politicians to clarify the law. Successive Irish governments have failed to do so. In 2010, the European Court of Human Rights agreed, and called on the Government to finally legislate for X and clarify the instance where abortion is legal. Instead, the Fine Gael lead Government called on an ‘expert’ group to provide recommendations, which have only just been given to the Minister for Health. This delay is likely to have cost Savita her life. Unwilling to tackle abortion as an real and lived experience for Irish women, Irish politicians have avoided the topic to the detriment of not only Savita, but the approximately 4000 women forced to travel each year.

While abortion laws in Ireland are quite different from our own here in New Zealand, the apathy of politicians towards the issue resonates. It left me thinking could something similar happen here? Could a woman be left to die because of doctor’s interpretation of the law?

The answer is yes. In 2004, a woman was not given the option of an abortion and died after giving birth to a stillborn baby. This was the subject of a year -long investigation by the Health and Disability Commissioner. As Mary Jane Boland reported in the Sunday Star Times on 12 August 2007, a woman with a chronic heart condition “pleaded with doctors to abort her baby so she could live – but both she and her newborn son died”.

The Commissioner’s report details a severe lack of communication between physicians, which resulted in a 15 week delay in the assessment of the woman’s heart condition in relation to the pregnancy. Instead of the chronic heart condition being an immediate red flag in the first trimester that this was a very high risk pregnancy, the woman wasn’t seen by a cardiac team until 21 weeks. Furthermore it was found that the woman’s options – a termination or heart surgery – were not explained to her. She delivered a stillborn baby boy at 30 weeks and died 4 hours later.

Aside from the case appearing in the news in 2007, in relation to the Commissioner’s findings, it seems little was made of this woman’s death. Yet abortion in both Savita’s and this woman’s would have been life saving. – an often forgotten fact and one that was clearly glossed over in the 2004 case. This was not a catalyst for change in New Zealand, as the fault was defined as being not the abortion laws themselves but in poor processes and communication amongst physicians.

However, these two cases show the importance of abortion being a fundamental part of all medical services. It should never be something that a doctor has the power to deny and certainly not in instances where a woman is in severe pain or suffers from a chronic disease. It must be about trusting women to know their own bodies and respecting their right to freely choose how and when they bring a life into this world.

May these two deaths and the deaths of women daily across the globe remind us that no country is immune to ideology trumping medical evidence and human rights. Denying abortion can lead to death. Not just of the foetus but that of the woman – a woman with a partner, family and perhaps other children. While Savita’s husband and family are left to mourn a life taken far too soon, pro-choice activists need to raise our voices and call out politicians and leaders whose sheer cowardliness allow women to die. This holds true not just in countries like Ireland, with restrictive abortion laws, but here in New Zealand as well. Perhaps if abortion was decriminalized and destigmatised back in 2004, at least one woman, her husband, family and other child, would still be alive today.

Postscript- today in the Irish Times, Minister for Health, James Reilly has said that the Government will make a decision about whether or not to legislate for the X case early next year. In perhaps the most laughable quote, he said “you have to match the urgency of the situation with the need to have a thorough and proper consultation and a plan to deal with it and I don’t think that we can rush this in weeks but neither do I think we can afford to leave it for months and months on end”. Apparently 20 years is not sufficient time!