A great post by Alison McCulloch, about why defending Family Planning and Women’s Health Action are about more than abortion advocacy. This post originally appeared at The Hand Mirror.

Back when Christchurch anti-choice activist Andy Moore was still around (he’s gone and left us, and moved to Texas), he and a few others set up a campaign called Stop Family Planning (FP) – a campaign that looked a lot like the one in the U.S. against Planned Parenthood. 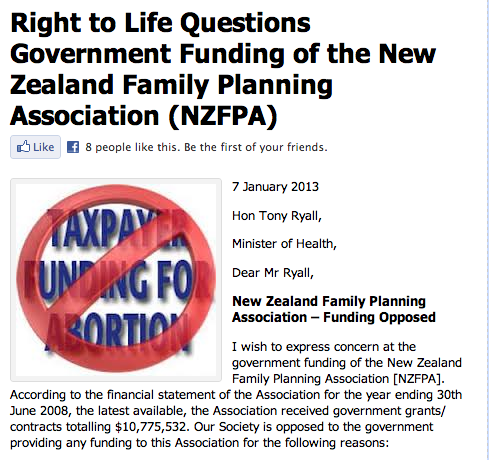 The campaign here was prompted by FP’s proposal, which began in 2009, to provide early medication abortion at its Hamilton clinic – which was to be a sort of a test clinic for possibly offering this option elsewhere. FP waited two long years for a decision from the Abortion Supervisory Committee, while the anti-choicers got busy whipping up a frenzy. Eventually, in 2011, FP withdrew the application, and last time I checked, women from the Waikato who wanted an early medication rather than a surgical abortion had to travel to Auckland for it. You can thank, in part, our backward laws for that – and for the fact that we’re way behind comparable nations in providing this early abortion option. But not helping the situation of course were the sterling efforts by Right to Life and Voice for Life and ProLife NZ and all those charities like Family First and Family Life International, who are only doing this because they care so much about the health and well-being of (certain) women.
Things had died down on the Stop Family Planning front since then. So much, in fact, that when I looked this past week, their old Web site (www.stopfamilyplanning.org.nz) was gone and the domain name was available. (If you feel brave, you can still look at the site using the Web archive/Wayback Machine.)
Family Planning has always been vulnerable to attack from conservatives, and the attacks always come. So I suppose it’s not surprising that the new year has brought a fresh round of invective being directed at FP, this time from Ken Orr of Right to Life. (The others will no doubt pile on at some point.) RTL just ended a 7-year-court casewhich it mostly lost aimed at ending abortion in New Zealand, so I suppose they have some time on their hands.
The latest attacks, which so far include a complaint to the Charities Commission about FP’s (and Women’s Health Action’s) charitable status (here’s Red Queen on that), a letter to the Minister of Health demanding FP be defunded (yes, following the U.S. ‘Defund Planned Parenthood’ playbook to the letter), and, on Saturday, one of the most – I don’t think I have the words – vile screeds I’ve had the misfortune to read in a long time. (I’m not linking to all this for various reasons, including its offensive nature, but if you want, you can hop over to the site. Just search “Right to Life New Zealand”. Don’t say you weren’t warned…)
That latest effort is titled, wait for it, “Family Planning Declares War on Women”.
Aside from the usual attacks on abortion and the “culture of death” etc. etc., this piece contains a lot of stuff that, as one person has already suggested, is quite likely defamatory and is most definitely highly offensive and insulting to, well, pretty much everyone. Everyone who isn’t in a heterosexual marriage and only having sex for procreative purposes, which means most straight men and women, and definitely all lesbians, gays, transgender people, questioning, queer… (trigger warning for misogyny, homophobia, transphobia over the jump). I’ll just include one paragraph from the “War on Women” piece to give you an idea:

The NZFPA is part of the sex education lobby that is systematically undermining traditional morality and is aggressively promoting an ideology of lustful sexual licence while pretending to be concerned only with the health and safety of young people. As part of their subversive agenda, the Association has produced “a sexual and reproductive health guide for same sex attracted women” titled “Keeping it Safe” The guide is amoral, and promotes unnatural and degrading sexual practices that denigrate the dignity of women. Our young women deserve better.

Now, there’s an argument that, ‘Well, no big deal, no one takes this stuff seriously, and nor should we’. ‘Don’t give it any air, it’s just too outrageous.’ To that I’d say: Yes, but also no. And no for two reasons.
The first is that whether or not these kinds of attacks, particularly the complaints over charitable status and the demands that FP be defunded, succeed or fail, they have a chilling effect. They make it harder for WHA and FP to speak out on important issues like our backward abortion laws, marriage equality, or to offer help and support for young people who might need abortion care or a knowledgeable, friendly ear on contraceptive or sexuality issues, for people who don’t fit inside traditional gender norms – for anyone, again, who isn’t part of an idealised traditional iStockPhoto “family”.
The second reason to be wary about ignoring this kind of thing is that these groups have lots and lots of money. And money gets you places in the political world. Right to Life just spent – and this is only my guestimate – well over $100,000 on its court case, which made it to the Supreme Court and could have had extremely bad consequences for reproductive health options. You can look up Family First, Family Life International NZ and the scores of other such organisations on the Charities Commission Web site to see how much they’ve got. For example, FLI NZ had donations of $688,869 in 2011; Family First’s were $317,783; Right to Life, which like the pro-choice AbortionLaw Reform Association of NZ is an incorporated society, got $34,822 in donations in 2011, while ALRANZ – full disclosure, I’m on its exec – less than $2,000 in 2011. (Meanwhile Rape Crisis faces closing some of its centres for want of funding!)
Oh, I just thought of a third reason to give views like Right to Life’s a bit of air, and that’s to try to expose the wider agenda of a group that is often given respectful media treatment when it campaigns against abortion access, with little or no mention of what other delightful bans and restrictions and commandments it wants to impose.

So far, efforts to follow the conservative U.S. playbook on so-called morals issues haven’t worked too well here – the reasons why are worthy of many a blog post – but that doesn’t mean we should drop our guard for even a nanosecond.Update: My bad for not linking to QOT on this.