Dispatches from the US: Clinton vs. Sanders

This is the fifth in the blog series by Morgan Healey, immediate past President of ALRANZ, who has recently returned to the US. It aims to bring to life the uniquely absurd state of reproductive rights and justice in the US.

I shall suspend any pretense of objectivity by not including any of the Republican candidates in a discussion about who I will cast my vote for this primary season. The positions of ALL the Republican candidates on issues relating to reproductive justice, economic equality, labour and immigration rights, gun control, justice reform are heinous, and I can safely say any one would be a stupendous disaster as President. Subsequent to the Iowa caucus, which was held on 2 February 2016, Martin O’Malley dropped out of the Democratic primary. Thus, as a registered Democrat in the state of Massachusetts I have two choices come primary day – Hillary Clinton or Bernie Sanders.

I have to admit that I thought Bernie had sealed my vote early on. I was ‘feeling the Bern’ (yup, that is his slogan, and one can’t help but recommend seeking medical attention for any funny burning sensation) … that was until Planned Parenthood, NARAL Pro-Choice America and the Human Rights Campaign formally endorsed Hillary Clinton for President. These are three organisations that I have a huge respect for and they have all said, ‘she’s our champion’, ‘she will protect your reproductive rights or the rights of LGBT people’. So what’s an activist to do?

Well for one, I registered to attend Planned Parenthood’s formal endorsement of Clinton in Manchester, New Hampshire on 5 January, where both Cecile Richards and Hillary Clinton spoke. I wanted to hear what Clinton had to say for herself. And I have 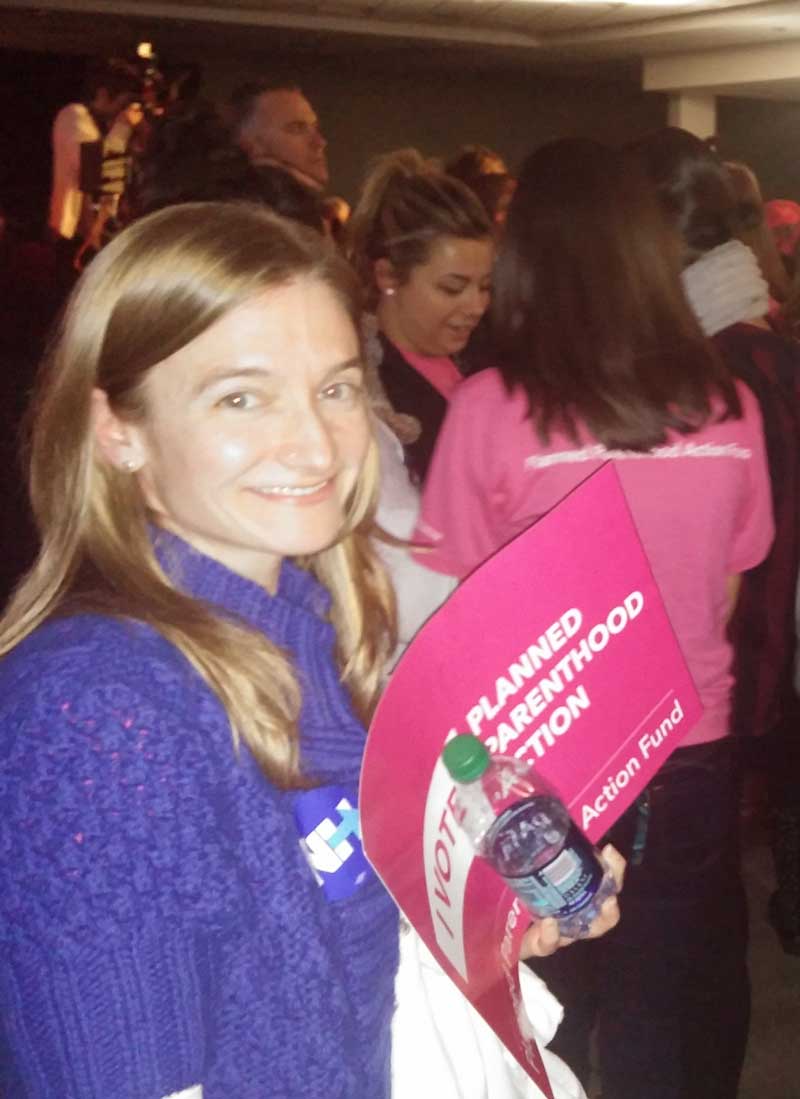 to say I was impressed; Clinton was intelligent, articulate, funny (yes, she has a sense of humour), and personable. I got the sense that she really cares about the cause and protecting women’s reproductive rights (it was a very cisgendered speech). If only I had embraced my inner, pushy Americanness, I too could have taken a selfie with her and you know what, it would have made my year because here’s the thing – I would love to see a woman occupy the White House, and not just as First Lady. Of course I absolutely draw the line at women like Carly Fiorina or Sarah Palin. I don’t know what these rich, white women are smoking, but they are only out to protect their own self interests, which funnily enough seem to align with those of rich, white men!

But for me Clinton is different. She always has been. Since I was about 10 years old I have been fascinated by the role of First Ladies, understanding them as historical figures in their own right and important influencers in their husbands’ political rise and presidencies. I have always thought they mattered. The Clinton Presidency was the first one I remember properly – the thrill of having a young(ish) – Clinton was the third youngest President behind Teddy Roosevelt and JFK – liberal (a term I use loosely), smart couple in the White House. There was buzz around the presidency, particularly when he was first elected in 1992, and part of that for me had to do with the highly intelligent, successful partner he brought with him; one who promised to be actively involved in the presidency, who sought out challenging roles like health care reform and human rights. And despite some very rough years, Hillary Clinton emerged from the role of First Lady to become a Senator and then Secretary of State – no small feats. Love or hate her, she has cast a long and influential shadow over the political life of America for decades.

It would take me many years and lots of reading to understand the impact Clinton era policies had on the most vulnerable and marginalized, specifically welfare reform and the ‘three strikes you’re out’ judicial policies, alongside destroying the regulations (read Glass Steagall – here is what the Sanders campaign has to say about its importance) that could have helped stop the GFC from happening. All of these policies have had a disproportionately negative impact on the lives of black Americans and women of colour, rendering suspect Hillary’s claim to be a champion for women in children (here is a good read on the Clintons building their legacy on white supremacy).

As I grew older and wiser the sheen of the Clinton Presidency and even Hillary Clinton wore off. She has consistently supported neoliberal policies and privatization responsible for eroding any semblance of a social safety net in this country and plunging millions into poverty or near poverty (see 2015 Jacobin article on Clinton’s corporate feminism). Sanders, on the other hand, is the unlikely candidate with his socialist message, his talk about the necessity of a grassroots movement to reform the US, to shift us back to a greater balance of equality and justice. This should be a no brainer and yet, here I am thinking about colouring in that thin black line for Clinton.

On the One Hand…

And here’s why: neither candidate offers exactly what I am looking for in the perfect presidential hopeful: the perfect storm of reproductive rights, economic equality and social justice. What Clinton lacks in economic policies she makes up for in her strong record of leading legislation to promote women’s equality and her (albeit newly found) commitment to paid parental leave, repealing the Hyde Amendment, and undoing some of her husband’s more egregious policies that have promoted the racialised school to prison and welfare to prison pipelines. I do believe her when she says she’ll support Planned Parenthood and access to high quality reproductive and sexual health.

Similarly, Sanders goes further than Clinton in many important areas – raising the minimum wage to $15 an hour, making college fees-free, health care reform that is a single-payer system. All of these things would go a long way to improving the lives of those who most need it. But, while Sanders’ record is good re reproductive and sexual health – he’s voted the right way – he isn’t out front talking about abortion, or Hyde. Economic redistribution will only take us so far (Nancy Fraser is a good feminist to read about how neither redistribution nor recognition alone will solve the political issues of a post-Westphalian, neoliberal world).

Do I allow my desire for a woman President to trump my concerns about the policies and political leanings of the woman candidate?

Does her recent move to the left provide some salve for the egregious errors of past decisions and positions?

And perhaps just as importantly, how does gender play out in terms of Clinton’s messaging and electability (see here for a good article on this question)?

Or on the other hand…

Do I accept yet another white man, who isn’t necessarily a leader on (but a supportive of) reproductive rights but has a more progressive and radical political platform?

Does political ideology outweigh pragmatics in terms of the candidate’s political promises?

Unfortunately, I have not yet reached a definitive conclusion. Talk to me in March after the Massachusetts primary. For now, I will need more time to sit and think about my options.

To read more on the Clinton vs. Sanders debate, here is a list of articles:

Why I am supporting Clinton over Sanders

Why I am supporting Sanders over Clinton

Why I am supporting Hillary Clinton, with joy and without apologies

Hillary Clinton supporters: it is ok to care about gender on the ballot

Why these two women broke a 100 year tradition for you