From Our Files: How the Abortion Law Isn’t Working

Friday, September 28 is International Decriminalise Abortion Day (that links to a map showing all the groups endorsing the campaign – we’re there!) And, yes, we’re one of the countries this applies to, since abortion remains criminalised in Aotearoa/New Zealand. What does that mean? Among other things, it means abortion is treated as a criminal matter,  not a health matter, and is governed by the Crimes Act. Abortion is illegal unless a woman meets one of the set of grounds set out in that act. ALRANZ has more info about the laws and why we need to change them over its main site. The laws we have now were passed in 1977, and as part of International Decriminalise Abortion Day, we’ll be posting a week’s worth of From Our Files posts looking back to 1977 and the fight over the law, as well as the impact it had then on women’s lives. We hope to include some other related posts, and invite our readers to send in contributions. You can contact the blog at alranzblog@gmail.com

There’ll also be a Tweetathon going on, hashtag #AbortionRts and, of course, the usual hashtag for local prochoice stuff: #prochoicenz  ALRANZ is on Twitter at @alranztweets

How the Abortion Law Isn’t Working

What takes 5 minutes to get and 49 days to get rid of? What do the counsellors at Epsom Day clinic do all day? What do you have to do to get an abortion with handcuffs on? The answers may be bizarre, but they are not funny. The little man down in Wellington tells us abortion will not be an election issue. Please read this article and decide for yourself. 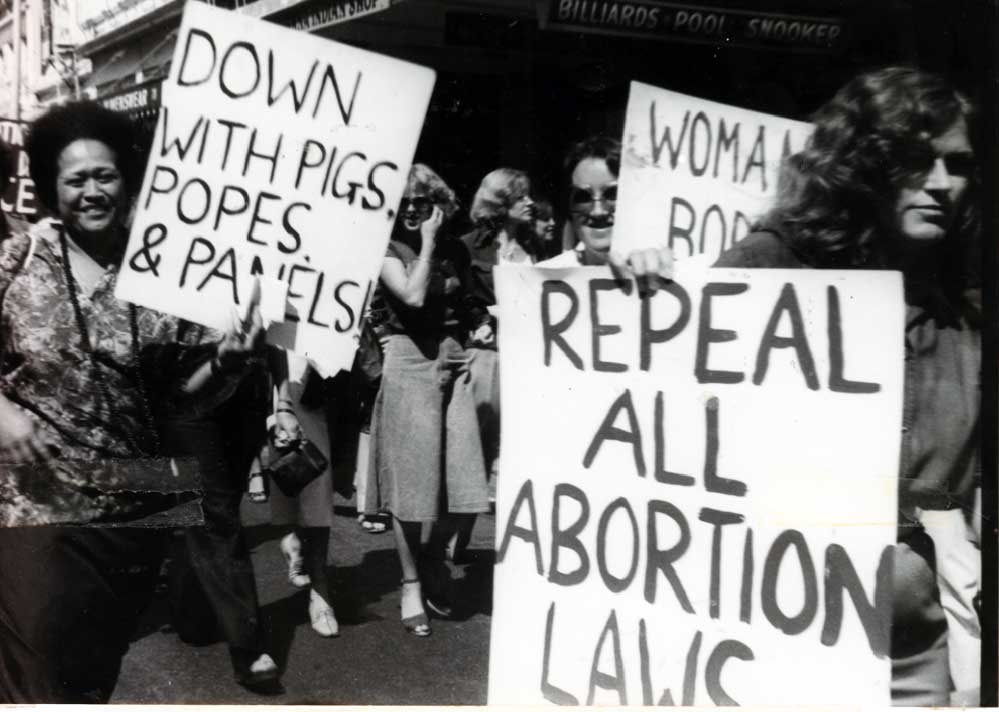 I rang up a GP the other day. “I’m writing an article about how the abortion law isn’t working…” I began.

“But you’re wrong,” she exclaimed. “It is working. It’s working exactly as they intended it should.”

And of course, she’s right. The Contraception, Sterilisation and Abortion Act which came into force in April this year has made it supremely difficult for women to get abortions and when they do, demoralising and often downright dangerous. The situation varies from district to district, from hospital to hospital and from doctor to doctor.

The Act empowers the Statutory Committee, under chairwoman Augusta Wallace, to license hospitals, public and private, which may perform abortions. It also appoints those who may make the abortion “decision”, the Certifying Consultants, or CCs. One of the two CCs who must approve each woman’s abortion “application” must be a practising obstetrician and gynaecologist (O&G).

The Statutory Committee has defined a practising O&G as someone who clocked up 50 deliveries a year, a clever move to keep abortions decisions in the hands of this particularly conservative branch of the medical profession.

Changes, Chance, but No Choices

In Auckland, the situation changes from week to week, and from month to month. Initially National Women’s O&Gs decided not to work under a bad piece of legislation and only one of them applied to be a CC under the Act. Those who could have been operating doctors refused to operate on women approved by 2 CCs, “basically,” I was told, “because they would not be told what to do by their less-qualified colleagues.” The operating doctor had, in their eyes,  been reduced to the unacceptable level of technician and they didn’t like it. For the woman this raises  to three the number of doctors she must convince of the “legality” of her “case”.

GPs sympathetic to desperate women seeking abortions soon sorted out “liberal” CCs from those who weren’t. One known liberal CC was flooded with patients, having seen about 200 to date, although referral agencies protected him from the full extent of the demand by only sending women with “good cases”. Waits of a week or two to see him were not uncommon. But even this avenue dried up in June when the one cooperative operating doctor left for overseas.

In June it briefly looked as if things would get better (insofar as anything can get better under this law) with the opening of an outpatients’ clinic at the Auckland Hospital Board at the Epsom Day Hospital. This was modelled very much on the lines of the old Auckland Medical Aid Centre (AMAC), put out of business by the Act. Between early June and the 23rd of the same month 17 abortions were performed at Epsom and then it all ground to a halt – no operating doctors. It seems that prospective operators objected to the low wage of $32 paid by the Hospital Board for a session at Epsom. Contrast this with the generous (some would say excessive) fee paid to CCs of $25 for a consultation with the woman and $10 by other means, eg by telephone. So until the Hospital Board approves higher wages the women wait.

For the counsellors working at Epsom, mostly ex-AMAC, it’s a depressing business. It’s boring sitting round all day without work to do even when you’re paid to do it by the Hospital Board. It’s worst when a patient does arrive. As one counsellor told me: “It’s pretty awful when you do get a patient. It’s difficult counselling someone when you know no abortion is available if that is what the patient chooses.”

The counsellors have found also that most of their time with a patient is spent helping her to fight her way through the system and organising the logistics of the lengthy and gruelling abortion obstacle course – acting more  as a patient advocate than a counsellor. There is a danger, the counsellors pointed out in a report to the Statutory Committee which the Hospital Board apparently did not pass on (but which the Statutory Committee do know about), that women do get totally lost in the system.

So there Epsom Day sits, flossied up to the tune of $65,000 according to Minister of Health, Gill, its brand new carpet untrodden, is silent counselling rooms smelling of new paint and its unused suction machine in the silent theatre mute testimony to the machinations of Parliament and the medical profession.

A few women have been getting abortions at National Women’s but a recent edict restricts operations to those over 12 weeks pregnant (into the 2nd trimester). Justification for this decision was given as bowing to the objections of nursing staff over the number of abortions being done, but it is suspected that a more likely motivation is to put pressure on the Hospital Board and Health Department to give the doctors their way over pay and employment conditions.

Does all this sound Machiavellian? Do you wonder what happens to the women? So did I. If they’re lucky and have the money then they can get to Australia pretty quickly, even though at its best that can be a harrowing experience. Otherwise … they wait. I heard of women with 2 CCs certificates who can’t get an operation at National Women’s at 8 weeks, but yes, they could maybe see them when they’re over 12. I heard of women with 2 CCs certificates refused by the operating doctor. There is a documented case of a 49-day delay for one woman from the time she went to her referring doctor till she got her abortion. I heard of women who were refused tests for foetal abnormality even though abortion is legal where the foetus is abnormal. On average women see 4 doctors on their way through the system but some see as many as 8. This depends on the “inside knowledge” of the doctors they first see.

They are often treated badly. One mother of a fifteen year old, frustrated by the difficulty she was having with the CC said to him: “We’re not getting anywhere. We might as well leave.” To which he replied: “Why don’t you?” One CCs letter states: “I have interrogated her for half-an-hour …” Another from an O&G: “The weakest part of her story is…” (This was her failure with contraception.)

Women are suffering medically because of inexperienced operators and the late stages of their pregnancies when they are finally wheeled into the operating theatre. In two horrific operating sessions at Epsom Day over half the patients ended up at National Women’s with complications. Of the 27 women (out of 54) seen at Epsom Day who did manage to get an abortion in New Zealand, 7, or 25.9%, were re-admitted to National Women’s with complications. Contrast this with the 3% complication rate reported for AMAC in its four years of operation.

In Wellington the situation is more straightforward. There, the CCs some liberal, some SPUC people, wanted to show that the conservative law would work so it could be retained. They’ve been inundated with women and have been doing more and more abortions. Many CCs have had their eyes opened. They hadn’t realised the real extent of the demand for abortion and had been sheltered from the harsh realities of women’s lives by the existence of AMAC. Now more women are passing through the doors of Wellington and Hutt Public hospitals than ever came to AMAC when it was open. 211 abortions were performed at these hospitals in the 3-month period May-July compared with 108 at National Women’s and Epsom Day for the same period. Sympathetic GPs set up a system whereby many women didn’t actually see the CCs themselves, as before the Amendment was passed, she could elect not to.

Women frequently leave the hospital theatre with vaginas packed with gauze, indicating a torn cervix. Prostaglandins are used unnecessarily causing a long and painful labour. Pain relief is not given to these women and no explanation is given about what is going on or the inevitable outcome of the prostaglandin abortion – the delivery of the foetus, dead or alive, in the bed.

Women are kept in hospital three days and exposed to judgmental attitudes from some staff members and hostility from other women in the ward who are often there hanging on to wanted pregnancies.

The four registered O&G CCs who women see at Christchurch Women’s are in Liz Sewell’s words “conservatives, supporters of SPUC”. The CC doing most of the approving is selective about who gets an abortion in line with his own prejudices. “If they’re middle-class and well educated and can express themselves he’s sympathetic and they’ll get an abortion. If they’re coloured or working class it’s what they deserve.” Women report brutal internal examinations with pain and sometimes bleeding. One doctor prefers to sterilise women at the same time as the abortion.

Outside Christchurch things are blacker still. Liz Sewell: “In Ashburton you have no problems as long as you’re a friend of the doctor. You can’t even get an appointment for a confirmation of pregnancy in Invercargill – the doctors don’t want to know about pregnant women. Women are reaching SOS Christchurch 12 and 13 weeks pregnant and in a dazed condition and they don’t even know if they’re definitely pregnant. It’s bad in Dunedin doo. It’s terrible, really terrible – quite unbelievable.”

Anna Watson, ex-administrator at AMAC, describes the New Zealand wide situation on abortion: “This legislation has made true SPUC horror stories at their worst.”