From Our Files: Remembering Bob Tizard

Bob Tizard, a former Labour MP and deputy prime minister, died on 28 January 2016, and he’s been remembered via obituaries in The New Zealand Herald, Stuff and Radio New Zealand. What you won’t read about in those outlets is Tizard’s involvement in the abortion rights struggle of the 1970s, when the current abortion laws were passed. (Similarly, as noted here, the role of his contemporary, the pro-choice National politician George Gair, who died last August.)

Students of history may know that in 1974, a brand new abortion clinic opened in Auckland laying down a challenge to both law and practice around abortion in New Zealand. Among the efforts to shut it down was a bill introduced by Labour MP and anti-choicer, Gerard Wall. It became known variously as “the Wall bill” and “the knitting needle bill” (the latter for obvious reasons, and a phrase coined by pro-choice advocate Dr. Erich Geiringer), and sought to close the clinic by restricting abortions to hospital settings, an effort that — rather like the modern-day T.R.A.P. laws of the U.S. — was spun as necessary to protect women’s health. Here’s Dame Cath Tizard, at that time Bob Tizard’s wife, on what happened next:

The introduction to Parliament that same year (1974) of the Hospitals Amendment Bill (the Wall Bill) to restrict abortions to public hospitals heightened the debate.

I was persuaded to come out publicly and speak on the steps of Parliament on the the day of its introduction. I was nervous about Bob’s reaction and told him about it beforehand. It could have been an embarrassment  for him, as Minister of Health, and, believe it or not, I did not know his views on the issue. In family discussions he had always been equivocal. On this occasion he just shrugged and said I had to do what I believed in. A most unflattering photograph of me on the steps of Parliament, wearing a rather shapeless gabardine raincoat, was published in the next day’s newspaper and I received abusive mail for a few days. One guy likened me to a ‘female Mussolini’ and looking at the photograph I had to agree there was a certain likeness. 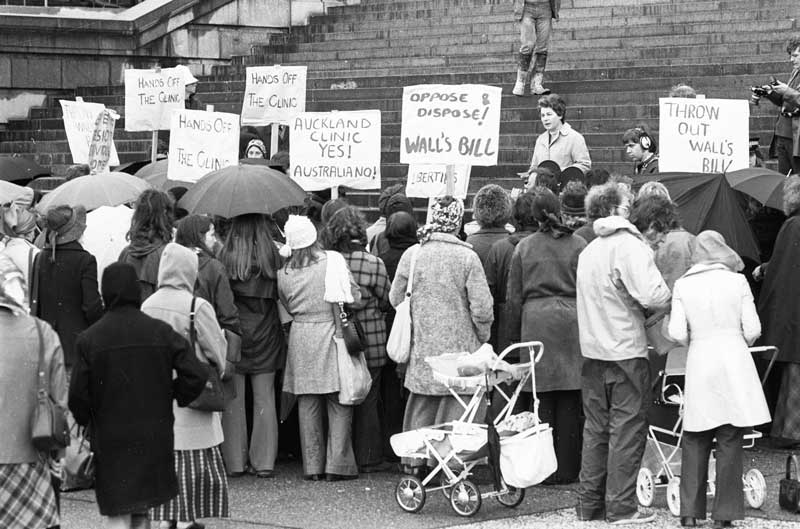 Photo: Alexander Turnbull Library. Dame Cath on the steps of Parliament, 20 September 1974, at a rally against the Wall Bill aimed at closing the AMAC clinic in Auckland.

Bob had always refused to engage with the family on this topic and never let on what his position was. He was, of course, going to have to vote on the issue in the House and as Minister of Health could hardly keep his head down forever. Nigel and I were driving to Auckland when the Bill came up for its second reading. We were just about out of radio range when Bob rose to his feet. I told Nigel to stop the car and crouched down to the car radio to listen. When Bob had finished, I said to our son that he could drive on and that he still had both a mother and a father. That’s how strongly I felt about this controversy by then.  Source: ‘Cat Among the Pigeons: A memoir‘, by Dame Cath Tizard. pp 115-6

Yep, Bob came out as pro-choice!

Those were busy times. Soon after the Wall Bill was introduced, PM Norman Kirk died, the clinic was raided and its operating doctor, Jim Woolnough, arrested. The bill did eventually pass, in 1975, and came into effect on 1 Sept of that year. But in a workaround, the clinic turned itself into a ‘hospital’ and was able to keep its doors open – till the next bill. Then, of course, came the Royal Commission on Contraception Sterilisation and Abortion, and the 1977 law that we still have. Against which Bob Tizard voted, as one of that Parliament’s most unequivocally pro-choice MPs. 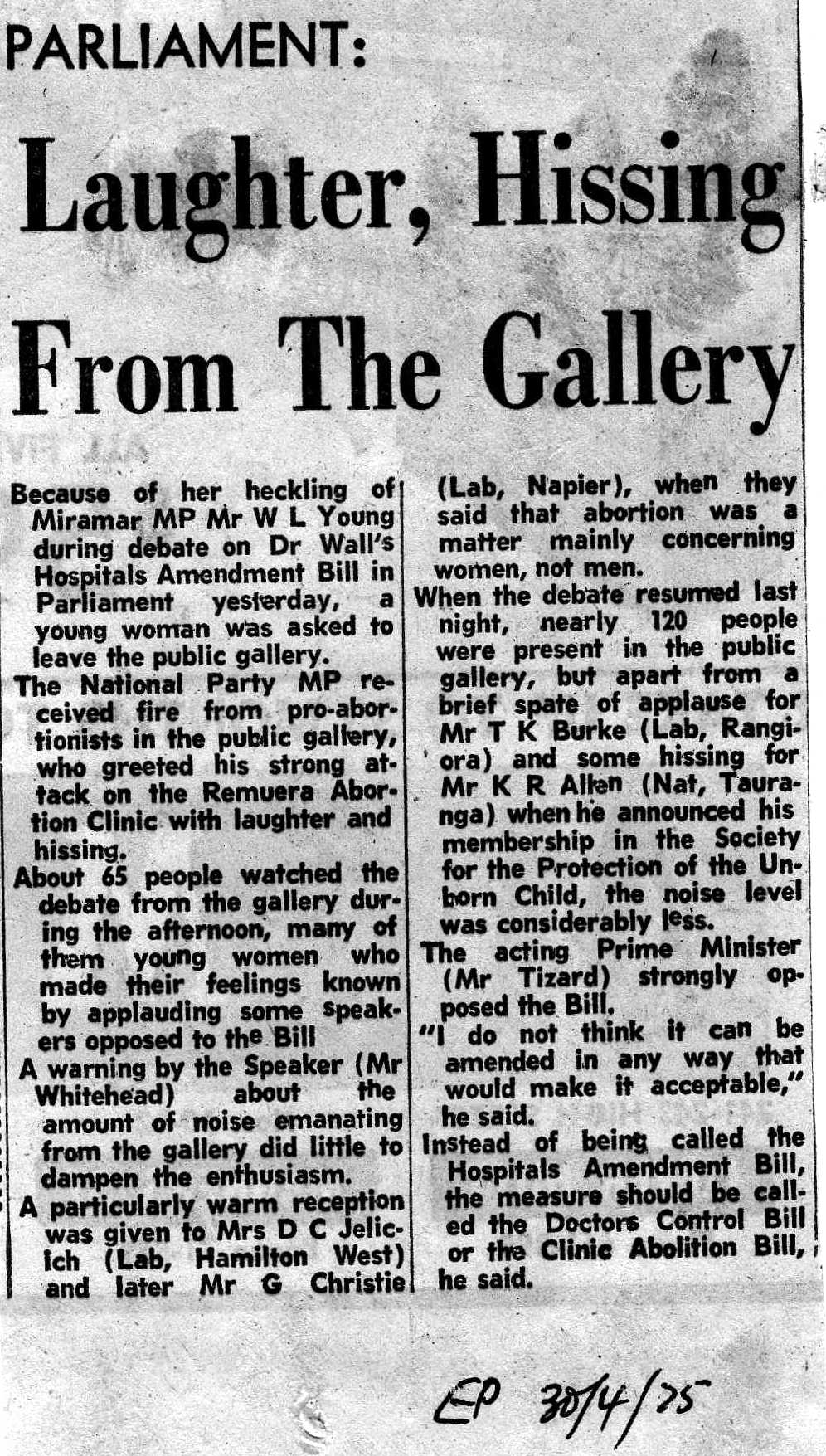 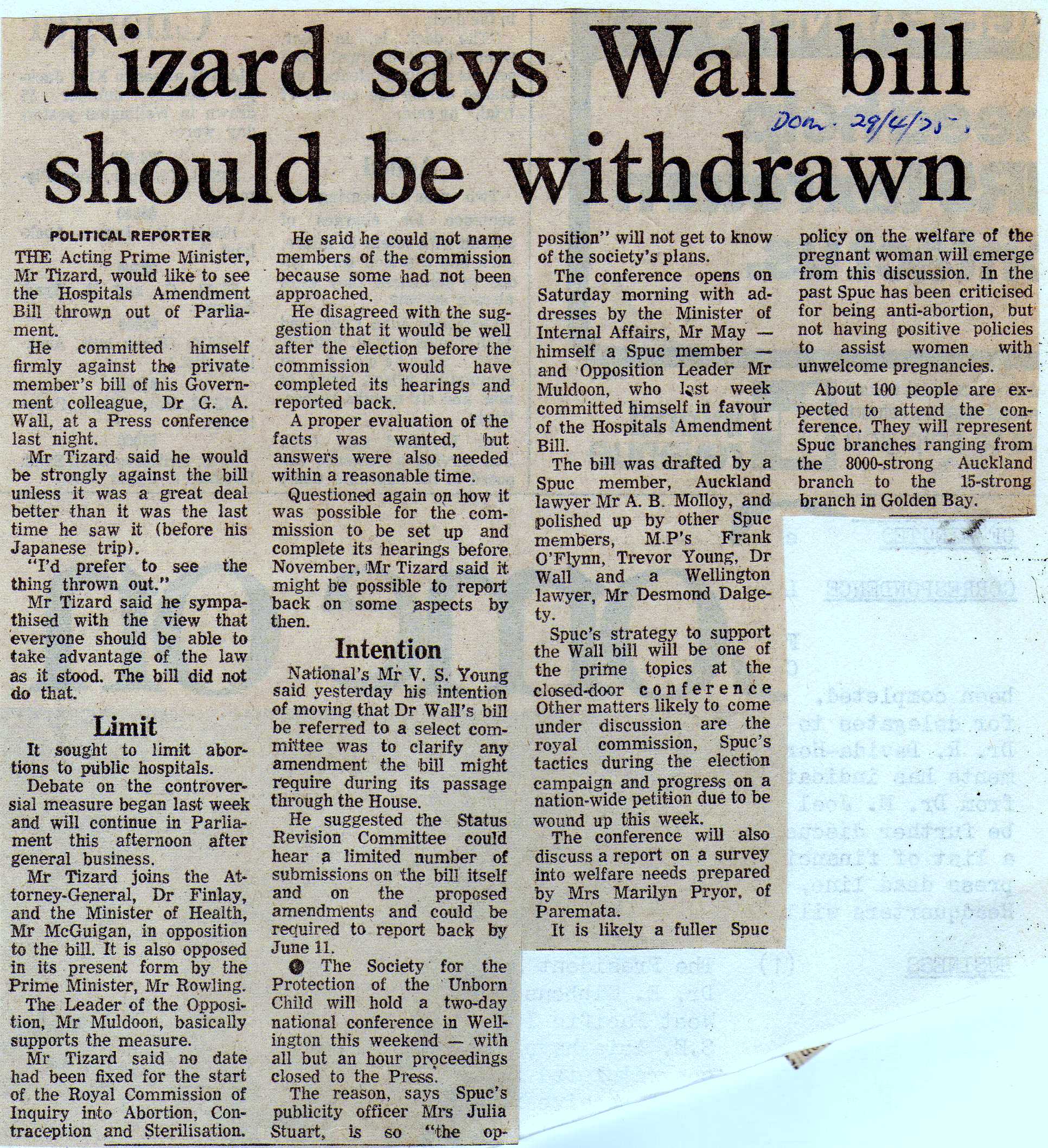 Thanks to Dame Margaret Sparrow for quote, pic and newspaper clippings.