This was a well organised congress with 2,400 registrants including several from Australia and three from New Zealand. An interesting feature was the electronic display of posters. Six separate screens enabled six readers to access all of the 251 poster presentations on user-friendly touch screens and these were also made available on the internet to conference participants. 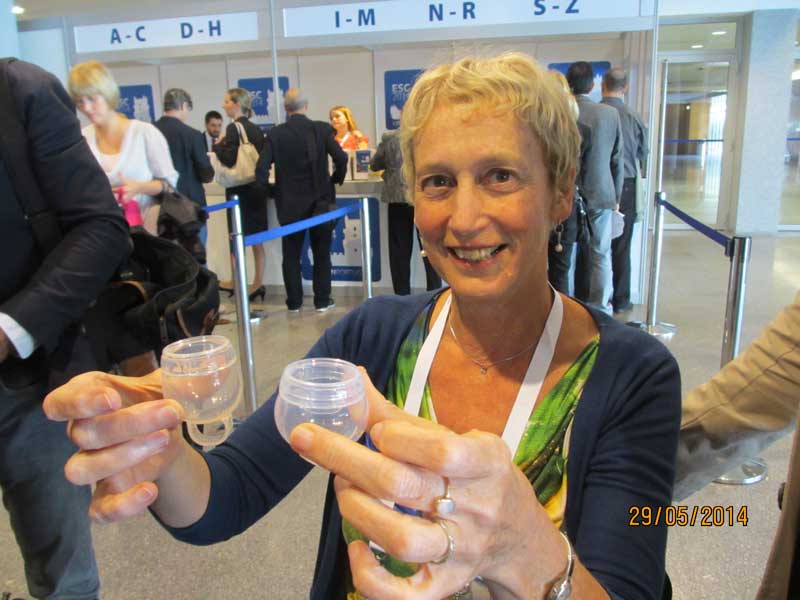 The opening address was historical: “Introducing the Dutch Cap: Dr Aletta Jacobs, first woman medical doctor in Holland” by Professor Saskia Wieringa, University of Amsterdam. This resonated with my interest in the history of contraception and we found we had a lot in common. I was able to tell her that there is a photo of Dr Jacobs in my new book Rough on Women: Abortion in 19th-century New Zealand.

An interesting session was on Green Contraception, promoting contraception with low environmental impact including the reduction of ethinyloestradiol (used in many oral contraceptives) which is harmful to fish and other wildlife when excreted into water. There were several papers discussion the use of long acting reversible contraception (LARCs) i.e. IUDs and implants. These devices are strongly recommended to prevent repeat abortions.

On the closing day of the congress a special session was arranged for a panel of experts to discuss the topical issue of what advice to give regarding the possible higher risk of failure of levonorgestrel emergency contraception in overweight patients. On present evidence the effect is marginal. A statistician explained that the statistics appeared to be skewed by a small cluster of pregnancies almost exclusive to Africa with subjects exceptionally short in stature. Overweight women seeking emergency contraception should be advised there is a possibility, yet to be confirmed, that the treatment may be less effective due to their weight. An alternative option to consider is the insertion of a copper-bearing IUD (intrauterine device).

Margaret Sparrow with Kristina Gemzell Danielsson, a professor, senior consultant and Chair of Obstetrics and Gynaecology and the Director of the WHO collaboration centre for Research in Human Reproduction at Karolinska Institutet, Sweden.

It was good to meet up with colleagues and share information. Although the focus was mainly on contraception there were a number of sessions on abortion. A forthcoming book which will be of interest is Abortion Care edited by Sam Rowlands, Dorset HealthCare and Bourenmouth University, published by Cambridge University Press. It is now available as a paperback. For further information see www.wisepress.com or click here.

Conscientious objection (CO) was discussed in one of the sessions with Dr Christian Fiala and Joyce Arthur making a dual presentation and arguing that CO is immoral, unworkable and can be regarded as an unethical refusal to treat. Sam Rowlands took a global view and considering the number of countries that recognise the right to conscientiously object, suggested some guidelines for its regulation. Too often it is unregulated.

In New Zealand, according to the Health Practitioners Competence Assurance Act 2003 section 174, a CO merely has to advise that the treatment can be obtained from another health practitioner or family planning clinic.

In a keynote address Adriana Lamackova, a German lawyer and Senior Legal Adviser for Europe representing the Center for Reproductive Rights , New York USA, discussed two cases from Poland where there had been abuse of conscientious objection and one case from Italy.

In R.R. v. Poland (2011) a woman was told that her fetus may have a fetal abnormality but because she was considering abortion further testing was denied and she eventually delivered a baby girl with Turner’s Syndrome. The European Human Rights Court in a ground-breaking decision found in R.R.’s favour: “States are obliged to organise the health services system in such a way as to ensure that an effective exercise of the freedom of conscience of health professionals in the professional context does not prevent patients from obtaining access to services to which they are entitled under the applicable legislation.”

In another case P. and S. v. Poland (2012) P. was a 14-year-old rape victim and S. was her mother. When abortion was sought the girl was seriously harassed and humiliated by doctors, the church and the general public due to the leaking of personal information to the press. Even the police began proceedings that she had engaged in unlawful intercourse. She was separated from her mother and confined to a youth centre. Due to the persistence of her mother she eventually managed to obtain an abortion some 500K from her home. The European Human Rights Court found that she had suffered mutiple abuses resulting in inhumane and degrading treatment. In discussing conscientious objection the court stated that any objection must be in writing and filed in the patient’s notes and the objector must refer to a non-objecting provider.

The Italian case came before the European Committee of Social Rights (Council of Europe) and the complaint was filed in August 2012 by the International Planned Parenthood Federation European Network. It is referred to as IPPF-EN v. Italy (2014). IPPF asserted that because of the high number of conscientious objectors in Italy (80% in some regions) women were denied the full exercise of their rights to sexual and reproductive healthcare services under Italian law. In a 14-1 decision the committee concluded that the competent authorities did not take the necessary measures to ensure the provision of health care.

The second smaller meeting, also in Lisbon was an International Summit on Reproductive Choice organised jointly by the Portuguese Society of Contraception, Catholics for Choice and the British Pregnancy Advisory Service. The meeting on abortion was facilitated by Brendan O’Neil, Editor of spiked Magazine UK. It was an opportunity to network with pro-choice invitees and discuss some of the more challenging issues. Speakers came from throughout the world and it was salutary to listen to those from Africa, the Philippines and South America describing the challenges of restrictive regimes.