Roe v Wade, and Political Will

Roe v Wade and the importance of pro-choice political will

Each year, on the 22nd of January, pro- and anti-choice activists remember the seminal Supreme Court of the United States’ (SCOTUS) decision in the case of Roe versus Wade. It essentially legalized 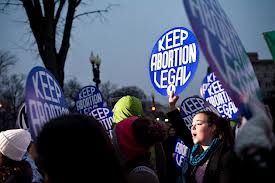 abortion in the US up to the point of viability, largely understood to be 24 weeks. Many states prior to 1973 had already made abortion legal in certain situations. The importance of Roe was that SCOTUS ruled that abortion was a private matter and thus a right protected under the US Constitution.

Here in New Zealand the fight for abortion has been less violent and vitriolic. As Alison McCulloch outlines in her important book, ‘Fighting to Choose’, the 1970s and 80s was a hotbed of activity around the issue of abortion, in particular the Royal Commission and its recommendations, leading to the 1977 Contraception, Sterilisation and Abortion Act (which continues to be one of two pieces of legislation governing abortion in NZ). However, an important point remains – unlike the US, with its many controversies and ongoing struggles – abortion is still criminalized in NZ. While that does not mean pregnant people are dying in the streets (NZ has a very high standard of safety when it comes to abortion), it does mean that women are not allowed to make the decision themselves, ceding that right to two certifying consultants, who verify if that person meets any of the grounds under the Crimes Act. This has become the status quo for abortion in NZ –  a medical profession that has made a bad law work, a civil society that seems to assume abortion is ‘legal’ and the political will to sit back and remain silent. If it ain’t broke, why fix it? We could end up with something worse, right?

I have never bought into that argument, mainly because I think it is a dangerous attitude to have. While pro-choicers sit back and rest on our laurels, knowing many (and I can’t highlight this enough) women can and do access abortion, what are the antis up to? For an insight into that, I want to return to my narrative of abortion politics in the US….

From the moment SCOTUS released its judgment in 1973 there has been backlash and anti-choice attempts to roll back the ruling and once again criminalise abortion. Fortunately for the 1 in 3 pregnant people in the US, public opinion polls have supported Roe v Wade, and access to safe and legal abortion has been maintained. Unfortunately, the antis have gotten savvier with their strategies and taken their fight to individual states, testing the boundaries of the ruling in Planned Parenthood v Casey (1992); a ruling which stated that so long as the restriction did not create an ‘undue burden’ on the woman accessing an abortion it was legal under Roe. The definition of ‘undue burden’ has constantly been tested, with a raft of anti-choice legislation that has swept across US states over the last 2-3 years. According to the Guttmacher Institute, 205 abortion restrictions were enacted from 2011-13, relative to 189 restrictions in the entire period from 2001-10. Why the enormous anti-choice swing, particularly when public opinion polls on abortion have been static for decades?

Myriad factors are likely at play here, but one of the most salient was the election of Tea Party Republicans across the US in 2010. Selling themselves as libertarians in economic terms, these social conservatives see no contradiction in the state legislating women’s reproduction. Often these politicians are backed by a very powerful and wealthy anti-choice lobby, which has contributed handsomely to Tea Party candidates at both the state and federal levels.  With what seems like a one-track mind, Republican politicians seem disproportionately obsessed with abortion (or as many pro-choice activists would argue, with women’s ability to make any reproductive decisions, including attacking access to contraception). In fact, abortion restrictions appear to be the ONLY solution politicians can think of to combat the economy’s sluggish recovery, increasing poverty and inequality and what has become their inexhaustible attempt to overturn Obama’s Affordable Care Act.

The result is that the proliferation of anti-abortion state laws impacts every aspect of abortion care. It has left women without access, denied them the choice of surgical versus early medication abortions, forced them to listen to doctors describe their ultrasounds, forced doctors to read scripts that are medically inaccurate and emotive, and targeted the clinics themselves with regulations that require them to meet the standards of an ambulatory clinic (something not required for first trimester abortions) or for doctors to have admitting privileges at the local hospital. Dressed up in terms of increasing safety and ensuring informed consent, the US anti-choice movement has shifted from a focus on the fetus, leaving them open to critiques about not caring about pregnant persons, to one that now argues it ‘cares’ about women. The lesson: don’t underestimate the flexibility and mutability of the anti strategy or the importance of electoral politics in ensuring the success of these tactics.

And so I can hear many people say, ‘that is the US, these things don’t happen here’. And to that I say, ‘we ignore the anti choice trends in the US at our peril’. I know New Zealand is not the US. The cultural contexts and the democratic principles upon which each nation has been built are very different. However, that does not mean that what happens in the US stays in the US. Anti-choice tactics displayed here are often taken word for word out of US anti playbooks. And where do you think all their money comes from????

In the past years, anti-choice tactics in New Zealand have resulted in threats to and harassment of abortion clinics, funding TV ads and full page advertisements in newspapers, and haranguing the Abortion Supervisory Committee (ASC) (based on reading the latest report) over sex selective abortion (a non-issue according to the ASC) and sought to crack down on certifying consultant’s use of mental health as a ground for abortion (primarily using the recent ruling in the NZ Supreme Court case of Right to Life v the ASC, which left the door slightly ajar for the ASC to review a consultant’s pattern of decision making). These are combined with the furor created by the Blenheim doctor refusing to prescribe contraception and issues surrounding ‘conscientious objection’ or ‘refusal to treat’, and increased surveillance by the state on pregnant bodies more generally (making contraception free for women and their teenage daughters on a benefit; a court case which attempted to charge a man with vehicular homicide because his pregnant wife was in the car at the time of the accident and subsequently miscarried; and the recent report by the Health Committee, which while it offers positive recommendations in relation to reproductive health, also constructs a notion of pre-pregnancy, whereby women would be in a continuous state of almost always pregnant and subject to self policing and policing by and through state policies).

The US highlights how the abandonment of the principle of Roe v Wade by partisan politicians can lead to the adoption of laws that increasingly restrict access to abortion for those most in need. As pro-choice organisations have mounted defences against these attacks, a cornerstone to this strategy is the election of pro-choice politicians; people in positions of power to overturn these restrictive pieces of legislation or reach a critical mass of votes to ensure these laws are defeated.

In 2014, New Zealanders will go to the polls to elect MPs and a new government. On this anniversary of Roe v Wade, I want people to think about the political implications in New Zealand of maintaining the status quo. I have heard political pundits argue that abortion is a red herring and will shift attention away from the ‘important issues’. It is the economy, stupid! However, abortion is a linchpin of reproductive justice; if a woman cannot decide freely on the timing, spacing and number of her children this will limit her ability to gain an education, participate in the economic growth of the country and ensure good social and economic outcomes for her children.

Abortion has never just been about the termination of a pregnancy, it is at the heart of a person’s right to bodily autonomy and inclusion in a just and fair society. So in 2014, let’s talk to our local politicians and candidate about their position on abortion and reproductive justice. Political will often requires a bit of a push from those of us enfranchised to choose who should represent us and who shouldn’t.