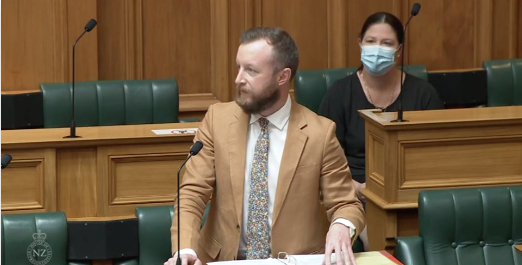 At the second reading for the Contraception, Sterilisation, and Abortion (Safe Areas) Bill, Kieran McAnulty issued a challenge. At the end of his call, he laid it down:

“If you’re going to vote against it – fine. Get up and tell us why.”

I wonder if any will rise to the challenge.

Opposing people being able to go to work or get health care without being harassed by anti-abortion protesters is a hard position to defend.

The MPs in question might go the route of many submitters to the Health Select Committee, who ignored the bill’s obvious boundaries and used the opportunity to attack abortion itself. Not unexpected, but not a very useful strategy, considering the fight for abortion as health care has been decisively won.

The work of the Health Select Committee has left them without even the fig leaf of hand-wringing over freedom of expression. The Attorney-General has made it clear he considers the current version of the bill limits freedom of expression only to an extent that is justified in a free and democratic society.

The new definitions of ‘protected person’ and the sorts of activities that the bill prohibits are narrowly defined. All areas will be bespoke, so that they will be as small as possible to achieve their objective.

(It will take months for the Ministry of Health to finely handcraft each one, which is not ideal. The process needs to be abbreviated. But that is a rant for another day. Soon.)

It seems probable that MPs who oppose the bill will do as they did at the third reading of the Conversion Practices Prohibition Legislation Bill and not make a speech, figuratively slinking through the ‘no’ door wearing a disguise.

In a way, this is good news. It is a signal of how the frame has shifted over the past 2 years. Abortion has taken its rightful place in the mainstream. Attacking pregnant people and abortion providers is now fringe.

The ‘no’ MPs will be explaining this vote for the rest of their careers. Will they come up with some reasons? Or will they take the path of least resistance and keep schtum?

Only time will tell.