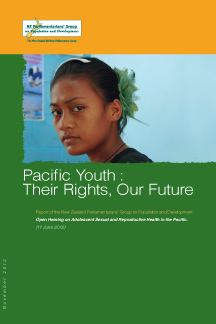 New Zealand currently spends about $550 million a year in official development assistance (ODA), mostly in the Pacific. Sexual and reproductive health and rights (SRHR), including access to safe and legal abortion and post-abortion care, is a cornerstone to development – if people are able to freely and easily choose the number and spacing of their children, that bolsters gains in many areas, including health, education (especially women’s education), gender equality, climate change and economic development. And these gains are threatened if that right is hindered.

So where does SRHR fit into the parties’ policies on aid and development coming up to this election? At a recent event titled The Great Aid Debate, I asked members of National, Labour and the Greens where sexual and reproductive health and rights sat in their priorities for aid. The Council for International Development (CID) has also asked all the parties about their stance on aid and development in general and two parties mentioned reproductive health under the most pressing issues to focus on for sustainable development: Labour and NZ First. The brief with the full answers is available here. Here’s what these parties say about SRHR and aid.

First to jump in on my question at the Debate was the Hon Maryann Street of Labour, to state that family planning is a big priority for her party. Street is the Vice Chair of the NZ Parliamentarian’s Group on Population and Development (NZPPD) and she spoke of the sexual and reproductive health needs of adolescents in the Pacific, including access to contraception and the need to support teenage mothers to continue their schooling.

Labour told CID their programme priorities will include “health programmes, including sexual and reproductive health and rights education, especially for women and girls”.

Next, Paul Foster-Bell of National acknowledged New Zealand itself is not a world leader in sexual and reproductive health. He cited NZ’s high rate of unplanned pregnancy and said NZ “looks envyingly” at countries like Norway which have a much better track record. (Hmm if NZ is so envious perhaps our government could start with following global best practice in SRHR such as decriminalising abortion.)

However, NZ can and should be doing much more. Last year, Population Action calculated NZ is only giving 21% of our fair share of funding needed to provide universal access to family planning. We got spanks for that! And NZ didn’t even attend the 2012 London Summit on Family Planning, where a number of other donor countries, including Australia, made large commitments to help enable 120 million more women and girls to use contraceptives by 2020.

Barry Coates of the Green Party spoke of the importance of people being able to choose the timing and spacing of their children in order to participate in their communities on their terms. He pointed out aid can make a difference in this and that the Greens prioritise SRHR highly. He promised the Greens would double current aid expenditure on SRHR…then said he wasn’t actually sure of the numbers…but promised they would significantly increase aid expenditure on SRHR.

As a result of hosting the first Pacific Parliament in April 2013, NZ First recognises “health and reproductive rights” are a key issue in the Pacific.They say “improving long-term sustainable outcomes for the Pacific region will require collaboration and transparency to identify what the issues are and how to work together to achieve tangible results. ”

New Zealand can and should do much more to support sexual and reproductive health and rights in its work in developing countries. A party’s policy on this is also indicative of how they prioritise SRHR at home. Labour, National, the Green Party and NZ First all acknowledge SRHR is important. Under National NZ has under-performed but how the other parties would action SRHR as a priority remains to be seen.