Women In Pursuit of Justice

On this, International Women’s Day, we thought we’d try to give a bit of a précis of the impressive 168-page UN Report on the Progress of the World’s Women in Pursuit of Justice, which came out late last year. But it’s so impressively thorough, this post leaves a lot out! (And includes a few digressions…). You can download it for yourself at the UN.

The report begins with a foreword from the head of UN Women, former Chilean President Michelle Bachelet in which she extols the progress made. Among her supporting evidence: “Today, 28 countries have reached or surpassed the 30 percent mark for women’s representation in parliament, putting women in the driving seat to forge further change.” Wow, a mere 28 countries have “reached or surpassed the 30 percent mark”. Rather than indicate how far we have come, it suggests how far we have yet to go. And brings up an issue that sticks in the craw of New Zealand pro-choice advocates: When New Zealand’s current abortion laws (more on them from a global perspective below) were passed, women comprised 4.6 percent of our elected representatives, all of whom voted against it. When anti-choice advocates seem to be taking cases to human rights courts and tribunals every other week in an effort to roll back New Zealanders’ reproductive rights, it’s sobering to note that there appears to be no legal remedy for a law that is all about women’s lives but which was imposed by men. How about that for a Human Rights complaint?

The report is made up of two parts, plus recommendations. Part I is titled “Making Justice Systems Work for Women”, while Part II looks at “Gender Justice and the Millennium Development Goals.” Part I comprises four chapters, (i) Legal Frameworks (looking at the progress, of lack of progress, in reforming legislative and constitutional frameworks on gender equality and women’s rights); (ii) The Justice Chain (looking at the implementation of laws in the formal justice system); (iii) Legal Pluralism and Justice for Women (exploring how to make justice systems work for women); and (iv) Justice for Women During and After Conflict.

The first chapter  includes some harrowing tales of women raped, shot and murdered by family members, women denied protection and medical care, and the legal struggles their cases prompted, leading ultimately to improved legislation or commitments to act by government authorities. Countries in which women had to force action through legal cases spanned the globe and included Canada, Brazil, Austria, Nepal, India, Colombia (an abortion rights case) and Mexico.

According to the report, “The two areas in which women’s rights are least protected, where the rule of law is weakest and men’s privilege is most fiercely guarded are, first, women’s rights in the private and domestic sphere, including their rights to live free from violence and to make decisions about their sexuality, on marriage, divorce and reproductive health; and, second, women’s economic rights, including the right to decent work and the right to inherit and control land and other productive resources.”

The report notes that discrimination practiced in the ‘private sphere’ – including domestic violence and women’s work – has been hidden from the rule of law. It reports that “in 17 out of 41 countries, a quarter or more people think that it is justifiable for a man to beat his wife.” But it also notes considerable progress on this front, pointing out that “as of April 2011, 125 countries have passed legislation on domestic violence”. While “Two thirds of countries have laws in place against domestic violence… many countries still do not explicitly criminalize rape within marriage.”

There are many specific stories on individual women, communities and struggles throughout the report that illustrate the bare figures and graphs, and bring the pages to life. Here’s just one:

After getting a divorce, Sandra Lovelace, an Aboriginal Maliseet woman, wanted to return to live on her reservation. However, according to Canada’s Indian Act, she could no longer claim this right because she had lost her legal ‘Indian status’ when she married a non-Aboriginal man. 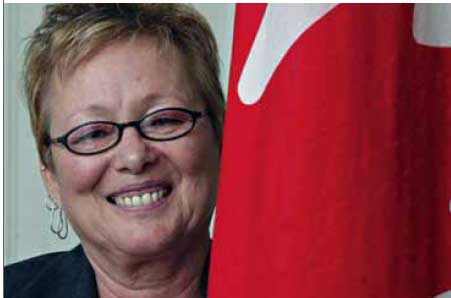 In this groundbreaking 1981 decision, the United Nations Human Rights Committee decided that the Indian Act amounted to a violation of Canada’s human rights obligations. The Committee found that the restrictions in the Act were neither reasonable nor necessary to preserve Maliseet identity and in fact interfered with Sandra Lovelace’s right to enjoy her culture. (The photo at left was taken by Noel Chenier/ CP Photo/ New Brunswick Telegraph-Journal via UN and shows Sandra Lovelace in 2005 just after her election in Canada’s Fredricton Legislature.)

Inspired by the Lovelace case, advocates have continued to challenge laws that discriminate against Aboriginal women. Strategic litigation in Canada has continued over the right to ‘Indian status’ for children on the basis of the gender of their grandparents. Sandra Lovelace continues to campaign for Aboriginal women’s rights and in 2005 she became the first Aboriginal woman elected to the Canadian Senate, representing New Brunswick.

On the issue of work, the report notes that: “In all regions, domestic workers lack basic protection and rights under the law.” Thus, despite “decades of equal pay legislation, wage gaps remain wide and persistent across all regions and sectors.” Based on available from 83 countries, the ILO says that women are paid between 10 and 30 percent less than men. One example cited is the UK: “Legislation on equal pay has been in place in the United Kingdom since 1970. However, in 2010, the gender pay gap was 20 percent.”

The discussion on reproductive rights makes clear the link between higher maternal mortality and restrictive abortion codes. That is, where abortion is more accessible, maternal mortality is lower. (As are abortion rates. The Guttmacher Institute has reported on the link between harsh laws and higher abortion rates, noting that the findings of a study of global abortion trends “provide further evidence that restrictive abortion laws are not associated with lower rates of abortion.”)

Across the globe, one in seven maternal deaths is the result of unsafe abortion. “Approximately 20 million unsafe abortions are carried out annually, killing an estimated 68,000 women each year.”

There’s so much more in the report, which is worth reading, and we’ll certainly be looking at it in future posts. But we’ll end today’s IWD installment with some stats:

• Total amount allocated to the gender equality components of these projects: $7.3 million (0.001%)

• In 48 countries, over one third of those assessed, women are prohibited from working in some of the same industries as men. (“No information” on this was available from 68 countries, while 78 had no restrictions.)

• In 50 countries, the minimum legal age of marriage is lower for females, exposing girls to the risks of early marriage. In the developing world, more than one third of women aged 20 to 24 report that they were married or in a union by the age of 18.

• Same-sex activity between consenting adults is criminalized in 40 percent of the countries surveyed: Illegal in 53 countries, illegal just for men in 24 more.

• Two thirds of countries have laws in place against domestic violence, but many countries still do not explicitly criminalize rape within marriage.

• Where there are laws in place on domestic violence, prevalence is lower and fewer people think that violence against women is justifiable.

• Only a fraction of reported rape cases result in conviction.

• Globally, women account for 27 percent of all judges. Serbia, Rwanda, Slovenia, Canada and the former Yugoslav Republic of Macedonia have the highest proportion of women judges.

• In most countries, women make up between 2 and 9 percent of the prison population, with the highest rates of imprisonment in China, the Russian Federation, Thailand and the United States.

• In many countries women are more likely to contact a community leader than a government official when they have a grievance.

• Sexual violence as a tactic of warfare has been used systematically and deliberately for centuries: In Rwanda, it is estimated that between 250,000 and 500,000 women were raped in less than 100 days, as part of the 1994 genocide, in which 800,000 people were killed.  In Bosnia and Herzegovina, between 20,000 and 60,000 mostly Muslim women were subjected to sexual violence in ‘rape camps’.

• While peace agreements may stop the killing, failure to address sexual violence in ceasefires or peace accords mean that crimes against women often do not stop when the guns fall silent.

• Five United Nations Security Council resolutions have together recognized the impact of conflict on women, established that sexual violence in conflict is a matter of international peace and security and have put in place concrete measures to ensure accountability.

• Post-conflict countries have higher levels of women’s political representation and are more likely to have gender equality laws and policies.

• In South Asia and sub-Saharan Africa, the majority of women are farm workers. Women do more unpaid work than men in all regions.

• More children are enrolled in primary school than ever before, but in some regions girls continue to lag behind boys. Women are more likely than men to be ‘education poor’ in most regions.

• Men’s labour force participation is higher than that of women in all regions of the world. The global share of women in wage employment in the non-agricultural sector was 40 percent in 2009, an increase of just 5 percentage points since 1990.

• Developed regions have reached 30 percent critical mass for share of women in ministerial positions, but no region has achieved the mark for the proportion of women in parliament.

• The sex ratio at birth has increased globally from a stable 105 in the early 1970s to a recent peak of 107 (i.e. 107 males for every 100 females). This is partly attributed to a rise in prenatalsex selection in some countries.