Yes, Ultrasounds are Mandatory for Abortion Here, Too 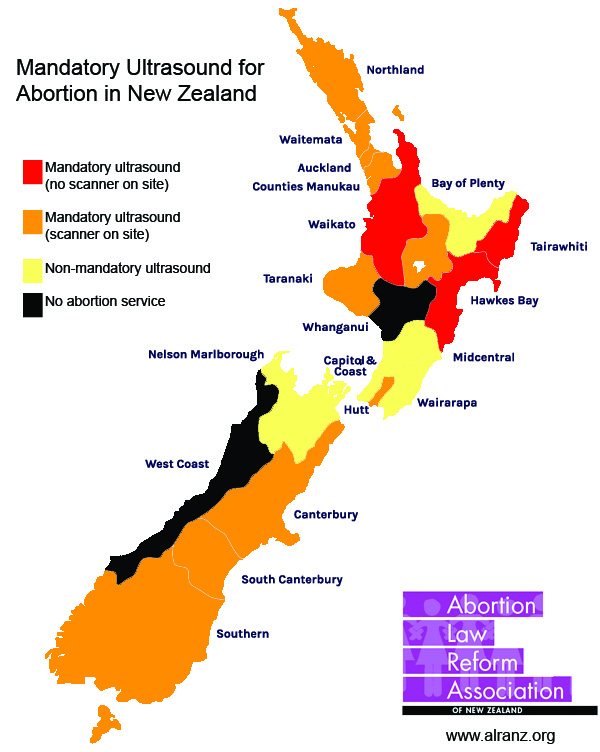 Click here for a spreadsheet summary that expands on the data in this map. Scroll to the end of this post for a copy of the questions ALRANZ asked  DHBs.

Just about every time some shocking new anti-abortion restriction pops up in the United States, a prochoice person here will have to point out that, uh, hey, we have that here, too.

Like Coley Tangerina’s recent “Don’t Pretend that Texas is the Place With the Abortion Problem”; or last year’s column by Alison McCulloch in the wake of Republican congressman Todd Akin’s comments on rape and abortion; or, from Queen of Thorns (just to pick one), this: “NZ Abortion Law: more hoops than you could throw a Tux wonder dog at”; or the organisation planning its third crisis pregnancy centre which believes, among other things, that emergency contraception can never be used, even in cases of rape; or, just this week, the doctor who cites “conscientious objection” in refusing to prescribe birth control.

Then there are ultrasounds. As those who follow the reproductive rights struggle already know, mandatory ultrasounds have become a popular anti-abortion tool in the United States, but, hey, we don’t have that here, right?

The main driver for that is most likely the Abortion Supervisory Committee’s latest (2009) “Standards of Care For Women Requesting Induced Abortion in New Zealand”, which state states “Gestational age must be verified and documented”:

Recommendation 32.1: Ultrasonography is recommended because it more accurately establishes gestational age, viability and site. It allows streamlining of care and may assist a woman and her abortion provider choose between medical and surgical methods.

ALRANZ made a submission on that document back in 2009 arguing that ultrasound isn’t always necessary, and we think it’s time for the ASC to revisit its guidelines. (Remember, the ASC is the three-member statutory body appointed by politicians to oversee our abortion laws.)

Sometimes, of course, an ultrasound is medically necessary and useful, and we’ve heard from providers who think it’s safer if ultrasound is part of routine abortion care. (And we’d like to pay tribute to those who provide abortion services, both for what they do and for the incredible safety record they have maintained. Thank you!)

For example, ultrasound might be called for in cases where the length of the pregnancy is uncertain (some abortion providers are only licensed for abortions up to 12 weeks, so they have to be sure, or they’re breaking the law) or if there’s concern the pregnancy might be ectopic (where the embryo implants outside the womb) or if an abnormality is suspected, for example a molar pregnancy in early pregnancy.

But another driver of the almost universal use of ultrasound in abortion care in New Zealand is our backward laws.

Laws that mean people seeking abortions have to see up to five doctors add to delays in care that push back the gestational age at which abortions take place, meaning more need for an ultrasound. The latest statistics show 55% of abortions in New Zealand take place at under 10 weeks, a figure that hasn’t moved much in the past few years. (Compare that with 78% at under 10 weeks in England and Wales.)

And how can that stat change given the cumbersome approval procedures needed under a law that says abortion is a crime, not a health matter? In the end, best medical practice is being held hostage to bad abortion law.

Recent research (for example this paper from the British Journal of Obstetrics and Gynaecology) has shown that routine ultrasounds are in fact not medically necessary in most abortion cases, particularly for early abortions when the method is medication, not surgical. In its publication “Safe Abortion: Technical and Policy Guidance for Health Systems,” the World Health Organisation says “Use of routine pre-abortion ultrasound scanning is not necessary”.

And lest you think there’s no action on this issue from local anti-abortion activists, they’ve been working pretty diligently behind the scenes to (following link is to our old blog, where some of the out-links are broken) add mandatory questions about ultrasound viewing to abortion consent forms.

We’ve also heard anecdotal stories of off-site ultrasound technicians making inappropriate (to say the least) comments to women having an ultrasound as part of abortion care – and doing so deliberately.

What’s more, it’s almost certainly anti-abortion lobbying that led to this recommendation in the 2009 ASC guidelines:

“If a woman has an ultrasound she must be informed that she is able to view the scan.”

(Because, of course, she wouldn’t be able to work that out for herself.)

To find out more about the situation, ALRANZ wrote to all the DHBs to ask them whether they required an ultrasound as part of abortion care; if so, why; whether ultrasounds were done on site; and whether the DHB referred to ultrasounds in its consent form for abortion care. Note: most of the info came in last year, so individual DHB policies may have changed.

Here’s what we asked the DHBs: 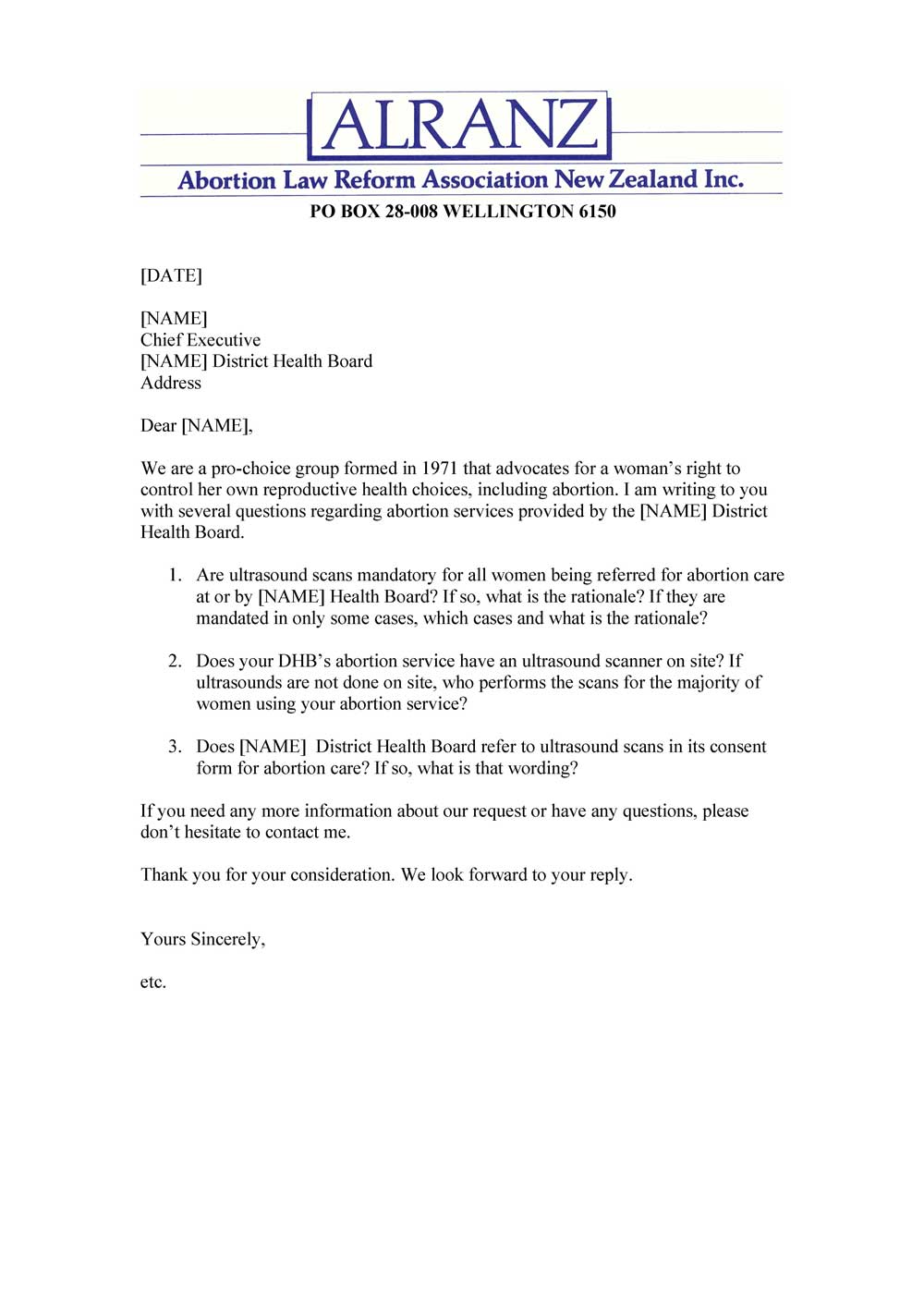 Thanks to the ALRANZ exec members who worked on this project. If you can financially support our advocacy for reproductive rights, click on the Givealittle button!